by Roxy Prima and Phoebe Cornog in Author Interviews

What do the Hotel Valley Ho, the Philadelphia Phillies home field, and a distillery in Tasmania have in common? Each one features eye-catching artwork painted by Phoebe Cornog and Roxy Prima, the masterminds behind Pandr Design Co. Phoebe and Roxy specialize in creating memorable murals for clients everywhere. (As the duo likes to say, they’re “taking over the world one mural at a time.”) Last fall, the pair shared their wisdom with readers in Wonder Walls, an inspiring how-to book packed with tips, tricks, and techniques for transforming any space with paint.

We sat down with Phoebe and Roxy to talk about why murals make us happy, what it’s like to paint at the edge of the world, and how to get your dog to sit still long enough to snag that cover shot. How did you meet and start working together?

PC: I’m from Philadelphia originally, and went to school at Pratt Institute and then Tyler School of Art, studying graphic and interactive design. Upon graduating, I applied to every job in California, and ended up just north of San Diego, working for a cycle wear company.

RP: I’m from San Diego. I studied graphic design at the Art Institute in San Diego. Then, I felt like I had everything I needed, knowing that I wanted to work for myself. So, I dropped out, started working odd jobs, while I was posting on this new app at the time, Instagram. Sharing my drawing and design work.

PC: That’s where I found Roxy. I had this big interest in lettering, and Roxy was on Instagram posting beautiful lettering work every day. I emailed her, and asked if she’d be interested in meeting for wine and cheese, and talking about lettering. One thing led to another, and here we are.

RP: We had no idea we were gonna start this journey together, but that’s what we ended up falling into. We went from selling little things like pins and stickers to becoming a full-on design studio. Painted one mural, then one thing after another, and now we’ve painted 230 murals all over the country and in a few locations abroad, and we have our book coming out. It’s been a very unexpected, exciting journey.

Where does the name Pandr come from?

PC: It stands for P and R, as in “Phoebe” and “Roxy.” But it also means to gratify, and that’s something we think we do for our clients. When and how did you paint your first mural?

RP: It was in our first year of business, for a little company called Red Bull. They had no idea that we had never painted a mural before. We just said yes to the opportunity, acted like we knew what the hell we were doing, and made it happen. We had originally had a goal of painting just one mural and, from that process, we learned that this was something we wanted to go full-force in. And we enjoyed the instant gratification. Murals transform spaces so easily!

Why do people love murals so much?

RP: Art—especially when it’s unexpected, colorful, larger than life—literally makes people happy, chemically. It releases cortisol in your brain! You know, when you’re walking down the street, and it’s just concrete and glass around you, and then you turn a corner, and there’s this big, rainbow-colored wall, you can’t help but be excited. And, where, in a gallery, you can’t touch anything, these are larger-than-life things that you can go up to, take photos. That’s, perhaps, our favorite part of painting murals.

PC: They’re very approachable, and they appeal to anyone. It doesn’t matter the demographic; all different sorts of people take photos with our murals.

RP: Even animals! They can’t even read, but they love our work. PC: During the pandemic, we did a lot of donation murals to the city of San Diego, when everything was boarded-up. In those cases, we were allowed to do whatever we wanted, and we had a lot of fun. Every painting was kind of an exercise in ‘let’s try something new.’ We did one with a realistic hummingbird, which was cool, because we never paint realistically. It’s fun doing more blending, and using a ton of colors. And we did another mural that said ‘Things will be okay,’ and that saying had realistic florals next to it. That one, I thought, turned out beautifully. Where is your furthest-flung mural?

PC: Tasmania! We were in Australia, for a conference. We flew down to Melbourne, did a mural and a workshop there, and then flew to Tasmania, where we painted for a whiskey distillery, on their corrugated exterior garage door. We saw boats leaving for Antarctica—

RP: And we got to hang out with some Tasmanian devils. We had the whole Tazzy experience!

I understand that your book, Wonder Walls, has a number of different mural projects. Which one would you recommend for someone who’s painting for the first time?

PC: If you’re too nervous to start out on a wall, we’d recommend the doormat project.

RP: It’s a little more low-stakes than when it’s on your wall. Plus, if you do the mat design we created, it’s basically blobs of one color for that leopard print, so…you can’t really mess up blobs.

PC: And we have furniture examples, too. Get furniture off Craigslist that you’re wanting to play around with, rather than something brand-new from the store. You can paint over any mess-ups.

RP: But then, if you mess up the doormat, you can just give it to your grandma, who thinks that everything you do is amazing. So, you don’t have to look at it, and she thinks it’s special!

What should people keep in mind as they’re starting out?

PC: Just be mindful, this is your first time, so don’t try to recreate the Sistine Chapel or anything.

RP: As we’ve learned from social media, people will wait in line to take a photo in front of a pink wall. So, your work doesn’t have to be complicated to make an impact. Just an unexpected pop of color, a shape on the wall, can really make a difference in the space, to make it feel bigger, make it feel more approachable, more inviting. It doesn’t have to be anything extravagant.

And who is the dog model, on the cover of your book?

RP: That’s my dog. His full name is Chewbacca, but he goes by Chewie. He’s a very, very cute miniature bulldog and—

RP: Yeah, he was a good model. It was a little tough to get that photo, but, with some ham, we were able to get him to sit still for one second.

PC: It was multiple takes of him sitting for one second, running, tricking him to get back up with the ham, and, you know, you have to shoot it a few times.

RP: But he really likes how the cover turned out, so that’s all we can hope for.

PC: We got his endorsement. 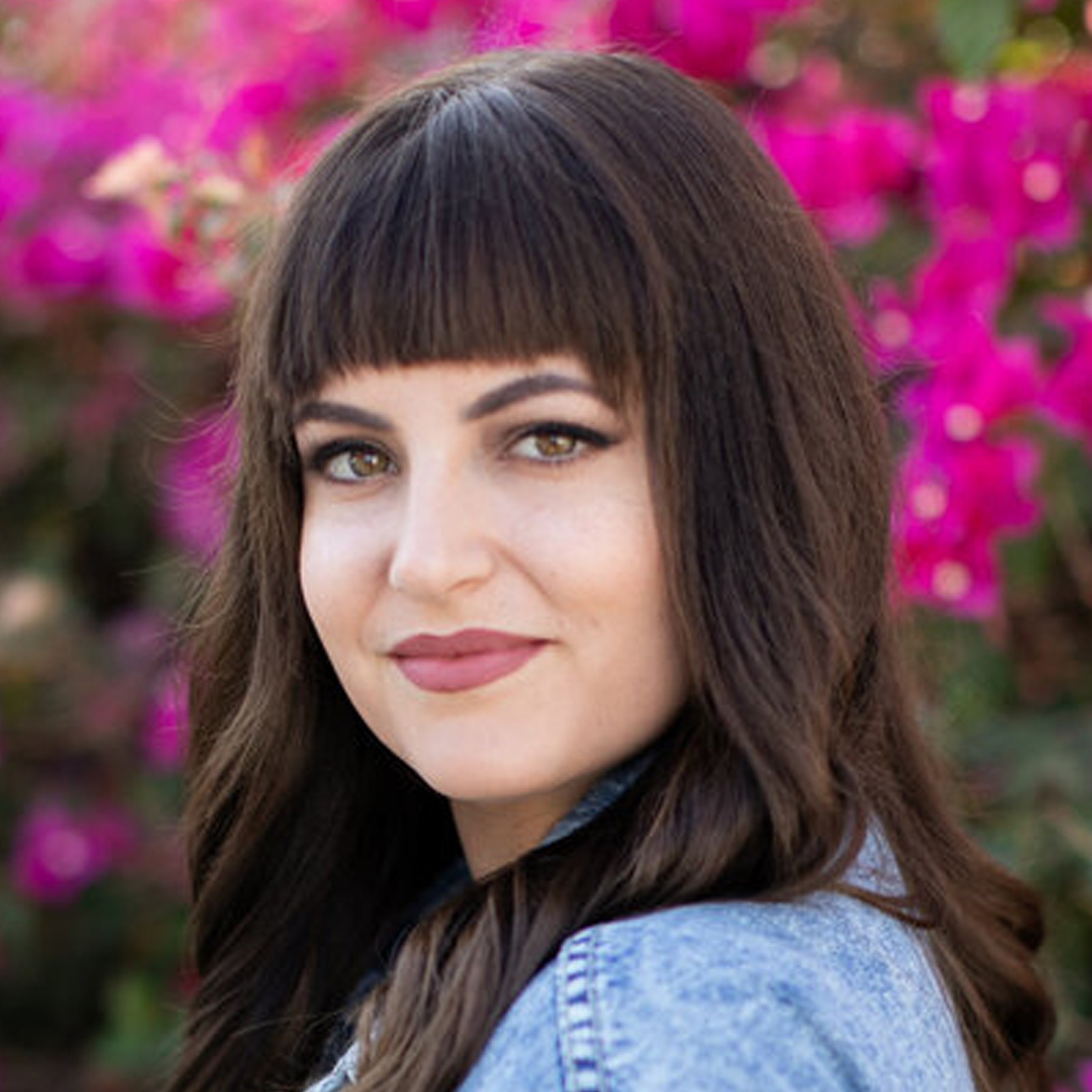 Roxy Prima is a graphic designer and cofounder, with Phoebe Cornog, of Pandr Design Co., which specializes in hand-painted murals. Together, Prima and Cornog got… See Bio

Phoebe Cornog is a graphic designer and cofounder, with Roxy Prima, of Pandr Design Co., which specializes in hand-painted murals. Together, Cornog and Prima got… See Bio 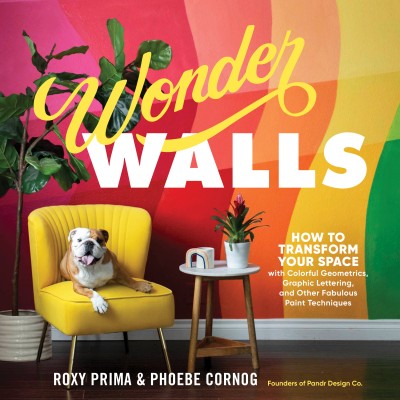 by Phoebe Cornog and Roxy Prima

We don't sell books directly through storey.com. If you'd like to buy Wonder Walls, please visit one of the online retailers above or give us a call and we'll take care of you. Support local businesses when you can!