On Writing — and Rewriting — a Rabbit-Raising Book

by Bob Bennett in Author News

Rabbit expert and author Bob Bennett calculates that, with the release of the newly revised Storey’s Guide to Raising Rabbits, he has been working on the same book for over half his lifetime.

Author Bob Bennett in 1975. Photo courtesy of the author.

Be careful what you wish for. You might get it. You might even like it. That’s the case for Storey’s Guide to Raising Rabbits, a book now in its fifth edition.

As a kid, I liked rabbits and writing. While I raised rabbits in the backyard, I wrote short stories, essays, poems, and a newsletter that I passed around elementary school classrooms. I continued to write while in high school, the Air Force, college, grad school, and afterward. It was mostly journalism at small and large newspapers and the Associated Press in the United States, as well as some features for Stars and Stripes, the daily read by members of the military around the world.

When I finally got my own home, complete with a backyard, I was able to return to raising rabbits. This time, it was my writing that took a back seat to magazine editing, public relations, advertising, and marketing work.

I was commuting five days a week for an hour on a bus to New York from New Jersey. I would read the paper in the morning and a book on the way home. One seatmate was Arnold Gingrich, founding editor and later publisher of Esquire magazine, who worked with the likes of Ernest Hemingway and F. Scott Fitzgerald. Arnold asked me what I did for a living and I told him I was a writer and some day hoped to write a book.

“So why,” he asked me, “are you sitting here reading the paper? If you are a writer you should be writing. You’re wasting time.”

Okay, I thought, but what to write? I had just completed a rabbit-raising merit badge manual for the Boy Scouts of America and its publication was met with considerable publicity, including an article in the New York Times. An editor at Garden Way Publishing in Vermont, the predecessor company to Storey Publishing, had read it, too. After an outline and some correspondence between us, I had a contract to write a rabbit-raising book. That was in 1974.

Gingrich soon saw me scribbling morning and night on a yellow pad. My wife watched me transcribe the scribbles on a Royal Standard on Saturday mornings.

The main idea of the book was to advocate advances in equipment, feeds and breeding techniques, which I had embraced for several years. Some of these methods didn’t sit well with my editor. He wasn’t crazy about my singular enthusiasm for wire hutches or pelleted feed. He wanted me to explore a variety of approaches and let the reader decide what to do. As an avid consumer of “how to” books I had always disliked ambiguous text that asked me to choose from among various possibilities. I especially despised the kind of book where the author wrote about all the mistakes he or she had made.

I don’t want to read about mistakes. I’m looking for success.

Meanwhile I had been raising rabbits for about 15 years, communicating with dozens of other raisers and working in the animal health headquarters of Pfizer Inc., surrounded by veterinarian and animal nutritionist colleagues who aided my writing efforts by sourcing agricultural school research studies, reviewing my text, and offering encouragement. I had experience. I had testimony and evidence.

I had the facts.

Finally I simply told my editor I was going to write it my way or I would take the book to the highway. He relented. It was published in 1975. A lot has changed since then.

Originally the book was to be called Starting Right with Rabbits because the company had a “Starting Right” livestock book series, but it became Raising Rabbits the Modern Way to fit in with a new series name. Now of course it is part of the Storey’s Guide to Raising series.

In its first incarnation, the book included my black-and-white photos and drawings. Now it is in a larger format with many full-color photos and illustrations.

An interior spread from the 1988 edition of Raising Rabbits the Modern Way. While I had learned a lot from other rabbit raisers, the former nosey newsman in me wanted to keep learning more, so I put my address and phone number in the book. Now it also includes my email address. Over the years I have received thousands of letters and phone calls and learned a lot more, much of which has become part of the book.

I have added sections on marketing and selling and showing over the course of the five editions. I’ve made updates and revisions each time it has gone back to the press, which has happened more than 50 times.

I’ve been writing and rewriting my book for 44 years. I started when I was 38. You do the math.

The last I knew it had sold well over 300,000 copies and was the best-seller in its category on Amazon. It has been published internationally in Spain, Portugal, and the Czech Republic. Readers from all over the world have come to see my rabbits — some from as far away as Japan. Author Bob Bennett and friend at Book Expo America, with a copy of Raising Rabbits the Modern Way.

Since 1975, how we find trusted information has changed a lot, too. Today, email and news from the Internet has supplanted snail mail and printed newsletters and left those without computers behind.

Except, of course, when they need to refer to their handy rabbit-raising book. 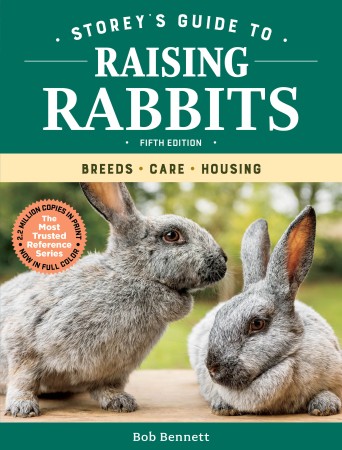 We don't sell books directly through storey.com. If you'd like to buy Storey’s Guide to Raising Rabbits, 5th Edition, please visit one of the online retailers above or give us a call and we'll take care of you. Support local businesses when you can!