Summer is peak season for enjoying a bright, creamy wheat beer. Randy Mosher breaks down the differences between the members of this broad beer family.

The wheat beer family is a grand family of beers that has medieval roots and suits the summer season stupendously well. Wheat adds a creamy texture, a hint of bright tanginess, and a dry palate, all making for refreshing — but somehow satisfying — beers. The terminology can be confusing; here’s an explanation of the words you’re likely to come across in this category.

Photo by Mars Vilaubi, © Storey Publishing, excerpted from Beer for All Seasons

The broad white beer family emerged in northern Europe around 1000 CE and was historically associated with hop trading centers like Hamburg and Nuremburg, a bit contrary to our modern images of these as beers with low hop rates and sometimes, as in the case of Belgian witbier, even with spices added.

Berliner Weisse is probably the oldest, last survivor of a family that included a number of sour, sometimes smoky beers such as gose, lichtenhainer, grätzer/grodziske, and others, all centered around the far north of Germany and Poland (Prussia until the end of WWI), where the long arm of the Bavarian beer purity law didn’t reach until modern times.

Brewed with about half malted wheat and soured with Lactobacillus, Berliner Weisse was the everyday drink of Berliners until Bavarian lager barreled in. The beer was low in alcohol, at around 3.5% ABV, cloudy, tangy, barely hopped, and very highly carbonated, packed in heavy stoneware bottles that could handle the high pressure better than the handmade glass bottles of the mid-nineteenth century. The characteristic drinking glass was a huge, straight-sided tumbler capable of handling a liter of beer and an equal quantity of dense, rocky foam. Because of Berliner Weisse’s low alcohol and sharp acidity, sweet liqueurs such as the caraway-tinged kümmel were often added at serving. Today, a raspberry (himbeersaft) or neon-green woodruff (waldmeister) syrup is usually added to soften the sharpness. Either way, it’s a super-refreshing sweet-and-sour beer with a pleasantly creamy texture — an ideal summer beverage. Sadly, it’s a beer in decline. Its two main producers have merged as modern consumers turn away from the old traditional products and look toward the mass-market lagers pitched at them. With luck, this venerable and delicious beer will find a way to survive in its homeland. If it doesn’t, fantastic versions are now being made at craft breweries in the United States and elsewhere. The unique charms of Berliner Weisse are too good to let it become resigned to the history books.

Another ancient beer, witbier is centered around Leuven and Hoegaarden, in central Belgium. Once the everyday drink of the region, by 1960 it was a dead beer, but it was fortunately revived by a man named Pierre Celis, who resuscitated and nurtured the style back to health, creating the Hoegaarden brand as he did. Due to his efforts, along with the style’s innate charms, witbier has roared back and found an enthusiastic following not only in its homeland, but also around the world. Coors widened the audience with its Blue Moon brand, largely due to the tireless efforts of Keith Villa, one of its brewers who tirelessly championed the beer and helped it succeed in the marketplace. Now, even the mighty AB InBev conglomerate is chasing the trend.

Witbier, a hazy wheat or ”white“ beer associated with the Belgian towns of Leuven and Hoegaarden, is typically spiced with orange peel, coriander, and maybe something secret. Photo by Mars Vilaubi, © Storey Publishing, excerpted from Beer for All Seasons.

Witbier traditionally uses a recipe that includes roughly equal amounts of very pale barley malt and unmalted wheat, plus a small percentage of oats. Together, this mix of malted and raw grains provides a creamy, almost milk-shake quality that forms the backbone of the beer’s balance. Historical styles hovered around the 3 to 4% ABV range; modern versions are closer to 5% ABV. Hopping is very light. Classically it is a spiced beer, with coriander and bitter orange peel lending pleasant spicy and fruity notes on top of what the fruity yeast strain delivers. There should always be a small amount of pleasant, lactic acidity; historical sources usually mention witbier’s acidity. Done right, witbier shows off a splendid opalescent sheen, a result of residual starches from the traditional mashing process.

Because of the difficulty of dealing with a large proportion of unmalted grains, getting the correct creamy texture, and managing the delicate balance of spices, witbier is a difficult style to brew. As a result, there are a lot of subpar witbiers out there, so one has to be choosy. Many U.S. brewers are eager to impress with aggressive spicing and may also be indifferent to the quality and character of their spices, resulting in disjointed, flat-tasting beers with odd and unwelcome flavors such as a savory celery seed aroma that obviously takes away from wit’s potential wonderfulness.

Witbier is associated with a short café tumbler for serving, round at the rim, with a faceted octagonal base.

The third great classic wheat beer tradition is Bavarian hefeweizen. It had its heyday in the eighteenth century, when it was the monopoly of the Bavarian Royal Brewery. The exclusive right to brew with wheat had been taken by the royal family as a means of limiting the use of wheat in beer, ensuring there would be plenty available for bread making, but of course it turned out to be a financially successful concession for them as well. Wheat beer’s popularity faded by the early nineteenth century, the rights were eventually returned to commoners, and in the past few decades hefeweizen has once again become a popular beer.

Malted wheat, typically between 60 and 70 percent, is used in the grist, lending a dry palate and a dense creaminess. Hopping is almost always light, although some brewers are starting to push the traditional limits with special editions. Modern versions are not soured. They also are not spiced, but the traditional yeast delivers a salvo of clove and allspice flavors as well as bubble gum and banana notes. Yeast strain selection, control of the brewing process, and above all fermentation temperature determine the final mix. Each brewery tries to achieve a particular aromatic balance.

The older and more classic versions are more of a pale amber color, while modern versions look like cloudy pilsners; some breweries make both types. While filtered kristal versions are available, the vast majority of weizen drinkers prefer the unfiltered version. Darker versions are available, but I find them not so much summer beers, but more suited to chilly spring days. The stronger weizenbocks — rich, delicious, and redolent of banana bread — are best as cold-weather beers.

Although now available on draft, hefeweizen was traditionally a bottle- conditioned product. It is served in a tall, curvaceous glass sometimes referred to as a vase. There is a specific pouring ritual that is a great attention-getter in bars and restaurants, where a little bit of show business really can help sell great beer. The glass is rinsed first to reduce foaming, then inverted on top of the opened bottle. Both bottle and glass are then tilted to a not-quite- horizontal pouring position. The lip of the bottle is kept right at the liquid level, then withdrawn with a turning motion as the glass fills up. Once the glass is nearly full, the last drops of liquid in the bottle are mingled with the remaining yeast by rolling the bottle on the table. The turbid dregs are then drizzled atop the foam in a circle, starting a cascade of yeasty haze that falls through the beer.

A slice of lemon is a controversial garnish. I am told by some German experts on the subject that a generation or more ago, the beers had more acidity; as the beers changed, the old-timers who preferred a more acidic beer added the lemon to compensate. The lemon is the subject of a lot of vitriol from the beer geek cognoscenti, but personally I’m agnostic. It definitely adds to the visual presentation and it’s easy enough to remove, but if you’re a purist, be sure to specify no lemon when you order.

The newcomer to the family is American wheat ale. These beers exploded in popularity in the 1990s in the Pacific Northwest with such brands as Widmer and Pyramid. Nothing more than simple, golden, unfiltered wheat-based ales with a modicum of hops, these differ from classic European wheat styles because they are fermented with a brewery’s all-purpose ale yeast rather than with a specialized wheat strain. As a result, the beers have the pleasant creaminess that comes from wheat, but without the complex aromatic profile typical of most European wheat beers.

With a minimally exotic ingredient in the form of wheat and a crunchy granola haze, these beers gently led an entire generation into the open arms of craft beer. The process is still happening. Beers like Goose Island’s 312 Urban Wheat ale are big sellers for their brands, offering a sense of something different without being difficult or challenging in any way, and drawing drinkers away from mass-market lagers. Progressive brands such as Three Floyd’s convincingly hopped Gumball Head bring the wheat beer experience to those more accustomed to healthy doses of hops, so there are plenty of choices no matter your preference or experience level.

Text excerpted from Beer for All Seasons © 2015 by Randy Mosher. All rights reserved.

Beer for All Seasons by Randy Mosher 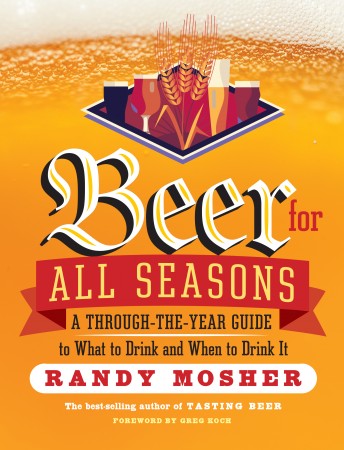 by Randy Mosher and Greg Koch

We don't sell books directly through storey.com. If you'd like to buy Beer for All Seasons, please visit one of the online retailers above or give us a call and we'll take care of you. Support local businesses when you can!