by Storey Digital Editors and Craig LeHoullier in Gardening

The author of Epic Tomatoes talks about the next generation of heirloom varieties and why you don’t need giant plants to get big tomato flavor. With the wealth of tomato varieties available these days, what compels growers to create new varieties?

That’s really a great question — and, in fact, that’s the first time it’s been posed to me. One answer is “because they can.” Tomatoes are not at all difficult to breed, and with such a rich variety of elements available at the outset, starting new varieties with never-before-seen color, shape, size, and leaf combinations fulfills the joy of creation and discovery. In the case of dwarf tomato varieties, breeding also fills an existing need, as more and more gardeners want to grow tomatoes but don’t have the space for them. In the end, if the results are worthwhile and the seeds are maintained for decades to find themselves in our great-grandchildren’s gardens, those of us who like to create new varieties will have been involved in making “tomorrow’s heirlooms.”

You co-conceived the Dwarf Tomato Breeding Project. What inspired the project, and why dwarf?

The inspiration for the project was a perfect storm of three closely timed events. Many of my seedling customers, smitten by the large, colorful tomato varieties, such as Cherokee Purple, Lillian’s Yellow Heirloom, and Green Giant, bemoaned efforts to control the rampant, tall vines. They wanted varieties that provided the same type of tomato excellence from plants that were easier to tend.

The second trigger was my purchase of a seed catalog from 1915 that described the creation of Isbell’s New Big Dwarf. As the first large-fruited tomato on a dwarf growing plant, Isbell’s was created when breeders crossed a small-fruited dwarf type (Dwarf Champion) with a large-fruited indeterminate (tall-growing) type (Ponderosa). Subsequent selection over some years led them to a short-growing, dwarf habit tomato yielding fruit with superb flavor in the one-pound range. Clearly, this demonstrated the potential of a breeding effort that, mysteriously, had never really been fully explored.

Finally, I met my project co-leader, Australian horticulturist Patrina Nuske Small, on the Garden Web forum. We shared a passion for large-fruited, colorful, shorter-growing tomatoes, and she had the desire and ability to do some creative crossing between known dwarfs and delicious indeterminate heirlooms.

The rest, as they say, is history. The first set of hybrids was named after Disney movie characters (such as Sleepy and Happy). We assembled a large team of volunteer amateur tomato growers in 2006, and by 2010, we had our first set of wonderful new varieties. We had a gardener produce a few thousand seeds of genetically stable varieties, which we then gave to a seed company for debut in the gardening world. It is very gratifying to now have 36 new varieties available to the public. Most are available through a limited number of seed companies or shared through the Seed Savers Exchange yearbook, but we expect that over time, if people really love them and share them more widely, they will become more commonly available.

Rosella Purple is just one happy outcome of the project’s work (and it was one of our favorites in an informal tasting we did here at Storey). What’s the story behind it? What are the ideal growing conditions for this variety?

Rosella Purple is a truly delicious tomato that is very similar to Cherokee Purple in fruit size, color, and flavor, yet it grows well in containers when supported by a short cage or stake. It hails from one of the very first dwarf crosses — Sleepy, which itself is a cross between a small red-fruited dwarf variety named Budai and an indeterminate, potato-leaved, large pink-fruited heirloom called Stump of the World. One of the first good selections that emerged was medium-sized and pink-fruited, which we named Rosella Crimson (after an Australian bird). The following year, a few plants grown from Rosella Crimson seeds produced purple fruit, which we named Rosella Purple. Seeds were shared and grown, and plants were selected for best fruit size and flavor until, at the F8 generation, we were confident it was ready to be released as a new, genetically stable, open-pollinated variety.

Rosella Purple, like all of the dwarfs, will grow fine in 5-gallon containers and provide a good yield of tomatoes. Growing it in a larger container, or planting it in the ground, will only increase its yield. The plant tops out at 3 to 4 feet tall, depending on sun exposure, and will provide tomatoes until the season comes to an end. Because dwarf varieties have stout central stems and very dark, thick, crinkled green foliage, they are attractive and unique-looking plants. The density of the foliage means that they could struggle with fungal diseases in humid conditions, so it is best to allow good air and sun exposure all around the plant.

Through the wonderful work of all of our project members (it is truly the first open source breeding project!), the color range of dwarfs is remarkable, with red, pink, purple, chocolate, green, yellow, orange, white, swirled bicolors, and stripes all represented. The project is now turning its attention to heart-shaped varieties, as well as paste and cherry tomatoes, to create as many options as possible for space-challenged growers. 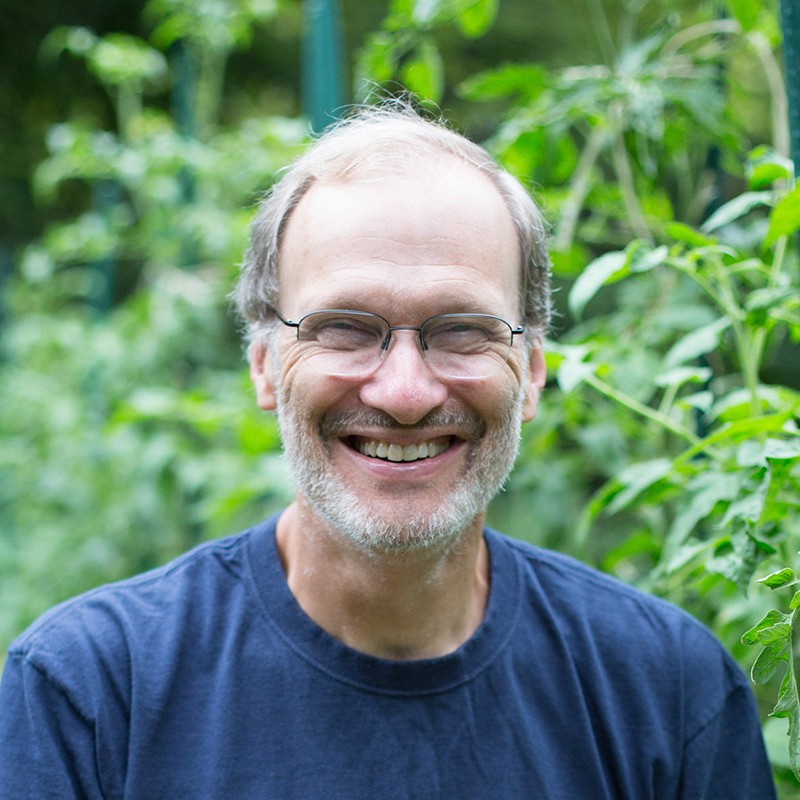 Craig LeHoullier is the author of Growing Vegetables in Straw Bales and Epic Tomatoes and the tomato adviser for Seed Savers Exchange. In the last… See Bio