Our love of all things maple is well established, but how well do you know its history? Here’s a little trivia from tree trunk to sweet syrup. 1. Most Versatile Stuff
Different tribes used maple products in different ways. Both the Potawatomi and Ojibwa drank the sap straight from the tap. The Meskwaki used syrup instead of salt to season meat and other foods. Iroquois women peeled, dried, pounded, and sifted the bark of sugar maples and red maples to bake it into bread. And in a unique blending, the Cheyenne mixed box elder sap with shavings from the inner sides of animal hides for a chewy type of candy.

2. That’s What Taps Are Made Of
Spiles, or tubes used to direct sap away from the tree trunk, were fashioned from hollow segments of elderberry, cedar, or sumac twigs. In 1859, Eli Mosher patented the first metal sap spouts.

3. Syrup and Slavery
Maple sugar became a political issue as the abolitionist movement grew. Because the cane sugar industry relied on slave trafficking and labor, using a locally harvested resource became a way to take a stand against the exploitation of humans.

5. Counting the Rings
Annual rings of a maple trunk are comprised of two types of wood. The wider band of lighter-colored wood is springwood, formed during the moist springtime when growth is faster. The narrower, darker band is summerwood, grown at a slower rate during the drier summer. Count either the light or the dark rings when aging the tree: one light ring and one dark ring together account for one year’s growth.

6. Oh, Canada
According to many historians, the maple leaf was used as a Canadian royal symbol as early as 1700. It wasn’t until February 15, 1965, that it made its official appearance on the country’s flag.

7. Syrup and the Industrial Age
The roots of modern maple sugar farming operations began with the availability of sheet metal in the 1860s, which allowed for such production-increasing implements as metal-lidded sap cans, flat-bottomed evaporator pans, storage tanks, and metal spiles, as well as cans for preserving finished syrup.

8. Two Drops Per Heartbeat
On average, it takes about 40 gallons (150 liters) of sugar maple sap to make just one gallon (3.8 liters) of syrup. The rate of flow of sap at its peak can equal 200 drops per minute or “two drops per heartbeat,” as old sugarmakers say.

9. Maple Money
Between 1876 and 1901, the maple leaf was on every Canadian coin, but today it remains on only the penny. In the United States, maple sugaring is featured on the Vermont quarter.

10. Going by Grade
Sap harvested early in the season is generally clearer and lighter in taste. As the season progresses, the syrup darkens in color and becomes more caramelized. 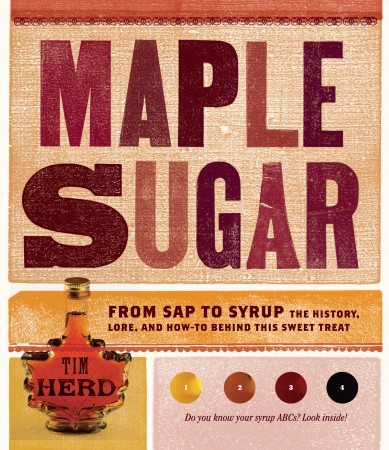 We don't sell books directly through storey.com. If you'd like to buy Maple Sugar, please visit one of the online retailers above or give us a call and we'll take care of you. Support local businesses when you can!