Patrick Dawson’s book, Vintage Beer, inspired us to start our own aged beer club. Now at the two-month mark, we’re ready for a taste test.

Earlier this year, we set out to track the evolution of three types of beer as we aged them over the course of one year. Now at the two-month mark, we’re ready for a taste test. But what kinds of changes can you possibly expect in a barley wine or imperial stout after such a short period of time? Some important ones, as it turns out. With bottles of Sierra Nevada Bigfoot Ale, Brooklyn Brewery Black Chocolate Stout, and Founders Breakfast Stout in hand, our tasting group reconvened on a recent Friday to discover what happens to these high-alcohol brews when you let them rest in a cool dark place for a couple of months. We were minus Zan, our director of marketing and publicity, but Storey photo editor Mars helped us assess our beers’ progress. Though two months doesn’t sound like much, the rest of us were a little skeptical: would we remember our impressions from our first tasting well enough to find any changes?

With author Patrick Dawson as our long-distance expert guide, we made it through our two-month tasting. Here are our notes (along with Patrick’s helpful insights).

A general note about appearance: We didn’t observe significant shifts in the look of any of our beers after two months, and Patrick says appearance is one area where we won’t see changes even over the course of one year. As a result, I’ll leave out notes about appearance for now (curious souls can always reference our inaugural post for initial impressions). Aroma: An “effervescent pour” (says Sarah) but still a very hoppy brew and slightly bitter. This time, rather than pine and resin, we all caught the distinct smell of grapefruit.

Taste: A little sweet, hoppy, and “like citrus rind.” Patrick explains that the rise of grapefruit in aroma and taste is a result of the aging process: “The hoppy compounds responsible for these flavors are incredibly sensitive and the hop character, while maintaining dominance, will change in profile, resulting in the shift from pine you tasted two months ago to grapefruit.”

Overall: The dominance of the hops that the IPA fans among us still love is also the reason this beer changed very little over two months, according to Patrick, and the reason that those who disliked it the first time “still don’t like.” Alee thought it bitter for her taste, but imagined it would be a refreshing candidate for sipping on a warm summer afternoon. Aroma: Everyone noted the strong smell of coffee with a hint of cherry and booze. Interestingly, no one smelled chocolate.

Taste: As we took our first sip, there was little initial carbonation; instead, it got fizzy after it was in our mouths for a few seconds. The mouth-coating this beer gave when fresh didn’t materialize, but at the two-month mark, it still tasted burnt to us. While we detected some chocolate flavors (dark, roasted), some noted a distinctly mineral taste (Mars and Matt compared it to the taste of snow). I thought I tasted something almost sharp and peppery. There was a universal reaction to the unpleasant sour aftertaste.

Overall: Patrick acknowledges that “this is an awkward phase for aging imperial stouts.” He likens the general burnt flavor to what happens when you leave coffee to sit out for a few hours: “Instead of that fresh roasted flavor, you’re left with just the burnt-tasting base. Once that roasted flavor is gone, it will never return, and you must now wait for that burnt flavor to develop into a more chocolate aspect.” We sure hope it does.

Taste: Coffee and chocolate, and maybe some hints of tobacco. Sweet with lots of body, like an alcoholic milkshake.

Overall: Filling and satisfying. Nicely balanced in terms of flavors, with a smooth, creamy, mellow finish. It lost any hint of the medicinal Robitussin® flavor detected two months ago, which, Patrick explains, is caused by the fusel (boozy) alcohols that often accompany these ultra-strong beers. Rest assured, fellow vintage beer tasters: the disappearance of the cough-syrup taste and the increased sweetness are all signs that our beers — and our vintage beer palates — are right on track. Patrick assures us that “while harsh-tasting at the outset, these alcohols will oxidize over time into sweet-tasting aldehydes (think amaretto or toffee).” And that sounds just fine to us.

We can’t wait to see what subtle changes these beers have in store for us at the four-month mark. Stay tuned for June! 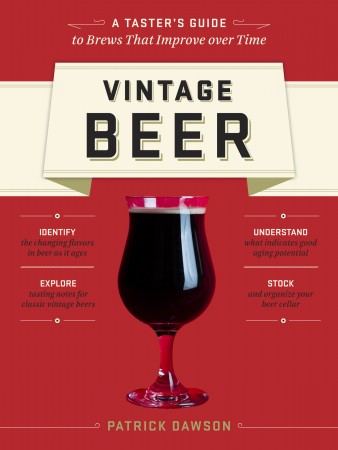