Strawberry-Rhubarb Cobbler: The Taste of Spring

Sweet spring strawberries meet tart rhubarb and a toothsome cornmeal topping in a dessert well worth adding to your repertoire. If you live in the northeastern part of the United States, you’re likely familiar with that most glorious and reliable harbinger of spring: rhubarb.

Sometimes called “pie plant” for its frequent use in baking, this old-fashioned vegetable, with its elephant-ear leaves and ruby red stalks, possesses a distinctive taste and a tart acidity that needs be gentled through sweetening and cooking — but not too much of either! An overdose of sugar and rhubarb will lose its delightful sprightly flavor; too much time on the simmer turns rhubarb into an unrecognizable puddle of mush.

Rhubarb is the locavore’s ultimate ingredient: a good percentage of the rhubarb consumed in New England and its environs is pulled from backyard plants. Though it does appear in supermarkets, the stalks you find in stores are often past their prime, flaccid, and lacking in juiciness and flavor. If you don’t have a clump of your own, farmers’ markets are the next best source. Some varieties have fat, thick stalks while others (usually the later varieties) send up more slender shoots. Both taste great as long as they show more red than green. To harvest rhubarb, tug the stalks from the base of the plant using a slight upward twisting motion (cutting stalks is not as healthy for the plant). Remove and discard the enormous green leaves, as they contain poisonous oxalic acid, and then trim off the whitish part at the base of the stalks. Cut the stalks into 1-inch lengths, cook, and enjoy!

This scrumptious cobbler recipe is from my Storey book, Chowderland. A cobbler is such a wonderful way to showcase spring and summer fruits of all kinds. I have worked out the proportions of this recipe carefully so that the amount of biscuit topping is just right — not too cakey — for a one- to one-and-a-half quart dish. Its sweetness is pegged to the strawberry and rhubarb filling, so if you use very ripe, sweeter fruit, you might want to decrease the sugar by a tablespoon or two. A hint of cornmeal adds a pleasing, slightly gritty texture to the cobbler dough.

Recipe excerpted from Chowderland © 2015 by Brooke Dojny. All rights reserved. 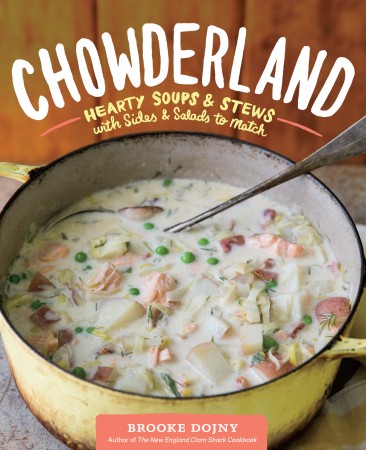 We don't sell books directly through storey.com. If you'd like to buy Chowderland, please visit one of the online retailers above or give us a call and we'll take care of you. Support local businesses when you can!