My Sourdough Culture Is Older than Yours

Made from a starter that dates back to the days of the Yukon Gold Rush, author Andrea Chesman’s sourdough bread’s got roots. I can’t help it; I brag about my sourdough’s DNA all the time. I got my sourdough culture from Jane Eddy, an artist friend in Middlebury, Vermont. She got hers from Cushman Anthony in 1977 in Ann Arbor, Michigan, where Anthony was a law student. Anthony got his culture from the fellow who lived across the hall, another student. This guy grew up in Alaska, and he got his culture from his dad, who was a fish and game warden, who got it from his secretary, who got it from her grandfather, who was one of the original Yukon Gold Rush “sourdoughs” of 1896.

The sourdough was actually a bit sluggish when I received it from Jane. After several feedings at 12- hour intervals, I gave it a boost with a half teaspoon of Fleischmann’s yeast to get it nice and bubbly. Sourdough cultures need to be fed regularly with equal amounts of flour and water to be kept going. Neglect can be harmful, but not necessarily fatal.

How regularly to feed a sourdough? Generally, at least once every two weeks is the limit for a refrigerated culture, but really, as long as there is no sign of mold, it is fine. Some bakers will say mold can be removed and the culture transferred to a clean jar. As long as the culture hasn’t turned black, it can be revived. I haven’t pushed a culture that far to know whether it is true or not. Now that’s really something to brag about. I used to be one of those people who claimed I didn’t care for sourdough bread. Then I started making the artisan-type no-knead loaves that baker Jim Lahey developed and food writer Mark Bittman, among others, popularized. I found these breads a little lacking in character until I started making the bread with the sourdough culture for leavening. Now my breads, which take no more than five minutes of mixing and two minutes of shaping, have plenty of flavor and texture. Recipe excerpted from The Backyard Homestead Book of Kitchen Know-How © 2015 by Andrea Chesman. All rights reserved.

The Backyard Homestead Book of Kitchen Know-How by Andrea Chesman 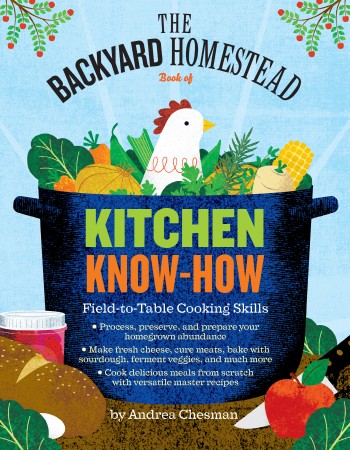 We don't sell books directly through storey.com. If you'd like to buy The Backyard Homestead Book of Kitchen Know-How, please visit one of the online retailers above or give us a call and we'll take care of you. Support local businesses when you can!