A Book and an Idea: One Small Town’s Soup Night Story

Although it’s been years since Maggie Stuckey first published her book on creating community through sharing a meal, a good Soup Night story is still as warming and satisfying as, well, a bowl of good soup. The need for community, for feeling connected to our fellow human beings, is universal and timeless. But in the modern hurry-scurry world, it’s becoming harder and harder to achieve. It’s a nasty kind of catch-22: the more fractured our lives become, the more we yearn for that sense of connectedness — and the more elusive it seems.

Author Maggie Stuckey wrote these words in the introduction to her book Soup Night, published in 2013. It’s remarkable how much our world has changed in the short period of time since then, yet just how little. Much has been written about how the same technology we use to find and build our communities virtually also serves to deepen the divide among us, often at the expense of what unites us: our basic humanness. And is there anything more human than hunger — hunger for food and for connection?

Satisfying that hunger is the basic premise of a Soup Night: people come together over a meal, meeting each other and eating together. The specifics of the gathering vary from place to place and group to group, but the building blocks are the same. There are Soup Nights all over the country — many of which are profiled in Maggie Stuckey’s book — and since her book arrived on shelves, it has inspired even more.

This story of a particular Soup Night begins at a small, independent bookstore in rural Missouri. Gary and Pat Worth opened River Reader thirteen years ago, and in that time, it’s become a hub of the Lexington community. Even with books at the heart of their vision for the store, the Worths had always intended the small kitchen installed at the coffee bar to be used for cooking classes. They partnered with Lorin Fahrmeier, a local, self-described “Feisty Farmwife ” who works for the University of Missouri Extension, to start a series of two-hour classes at River Reader, cooking up everything from Southern-inspired dishes to international cuisine including Mexican and Thai. When Maggie Stuckey’s Soup Night arrived at River Reader, Pat and Lorin thought it seemed like a perfect fit for the store-hosted cooking classes and scheduled their first Soup Night–inspired event. One day, Bill Miller, a local resident who loves to cook, wandered into River Reader and happened on a copy of Soup Night. He heard about the success of River Reader’s Soup University, and, as Pat tells it:

Bill was looking for a reason for the VFW to have a community gathering. He came into River Reader for a coffee and left with a book and an idea. Bill loved the recipes and decided to try a Soup Night for our small community at the VFW. Several members brought soup, someone brought dessert, and it began with just a handful of brave folks.

He tried it again and had more than the first time. The VFW decided to do a regular Soup Night in 2016, about once a month. No advertising, just fliers and word of mouth. Bill always made sure two or three folks brought a pot of soup. Usually there were six to eight different pots of soup and a dessert selection.

Last week was the VFW’s most recent Soup Night. There were lots of soups, desserts, and breads, which was a good thing: Bill’s Soup Night had over 90 folks attend. He had schoolchildren, parents, and grandparents. Everyone gets plenty to eat, and they get to know each other a bit over the soup. We are building community one bowl of soup at a time.

Ninety people may not seem like a big crowd, but it is over 2 percent of our total population. And all of this because of one man, a book, and the desire to build community.

We’ll raise a bowl to that.

Thanks to Gary and Pat Worth for their help putting this article together, and to Eric Heidemann for alerting us to the story in the first place. 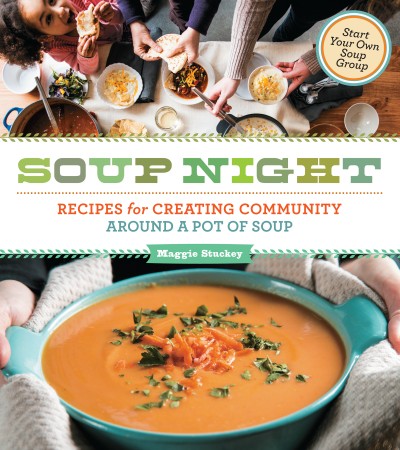 We don't sell books directly through storey.com. If you'd like to buy Soup Night, please visit one of the online retailers above or give us a call and we'll take care of you. Support local businesses when you can!