You don’t need fancy equipment, nor do you need to be an experienced baker, to give in to the desire to have homemade loaves of bread always on hand. Dough dropped (a little awkwardly) into the hot BreadPot.

Among friends, I have a reputation as a decent cookie baker. I’ve tackled other baked goods, too — muffins, scones, the sweet potato biscuits that ended up on the menu at a friend’s wedding rehearsal dinner. I’ve even tried my hand at challah (the traditional bread of my youth) with reasonable results. But somehow, I’ve never considered myself a bread maker.

A year or so ago, my mom gave me the gift of a BreadPot after seeing it featured in an Edible Boston article. Made by a ceramicist in my old neighborhood of Cambridgeport, the BreadPot acts in much the same way a Dutch oven does when using it to bake bread: the first stage of baking with the pot lid on steams the bread, while the final lid-less stage transforms the boule into a golden orb with a crisp crust and soft inside. After baking for 30 minutes with the lid on, the bread looks like this (and the lid comes off before the bread goes back into the oven).

Though familiar with the now-ubiquitous term “no-knead,” I didn’t know enough about the science of bread making to understand what it meant. In Bread Making: A Home Course by Lauren Chattman, she explains that no-knead replaces the kneading process with allowing low-yeast dough, or a pre-fermented starter, to rest for an extended period at room temperature: “It stands to reason that if you let your dough rest for 30 minutes and it develops a moderate amount of gluten, if you let it rest for 12 hours it will develop a whole lot of gluten…No-knead recipes contain a proportionately tiny amount of yeast, ensuring that there will be plenty of food for them to feast on while the proteins in the flour organize themselves.” After another 15 minutes without the lid, the bread is done.

Don’t be fooled by the nonchalance of the phrase: “no-knead” does not mean “no patience required.” To make bread requires planning. It is a process that can’t be rushed. But when nature hands you the gift of time in the form of a winter forecast that calls for a foot of snow, you can mix your sponge (if you’re using a pre-ferment) or your bread dough (as in the recipe below) the night before, before the plows and sanding trucks hit the pavement. In the morning, when you wake up to snow light and school cancellations and quiet roads and neighborhoods (but for the sledders), there isn’t anything better than structuring your morning around the flattening and folding of dough, and the slow rise, with the promise of a golden round boule that fills your house with that incredible smell, just in time for lunch. A little lopsided but still tasty: boule cooling on the rack.

While I still don’t consider myself a bread maker, I am a regular maker of bread. You can be one, too. You don’t need a BreadPot or fancy equipment, nor do you need to be an experienced baker to give in to the desire to have homemade loaves for your toast or sandwiches or as a satisfying accompaniment a salad. You just need a snow day every once in a while. Note: Though the loaf pictured in the photos here are not of the recipe included below, this No-Knead Raisin-Walnut Bread mimics closely the steps I follow when I use my BreadPot: preheating the pot before placing the dough inside, baking it covered for 30 minutes, followed by a short period of uncovered baking. The results are fabulous.

This bread benefits from coming into direct contact with the preheated cast-iron pot, which gives it an incredibly chewy crust. Baking it covered for the first 30 minutes has the effect of steaming, since the water escaping from the dough keeps the surface moist while the loaf rises. 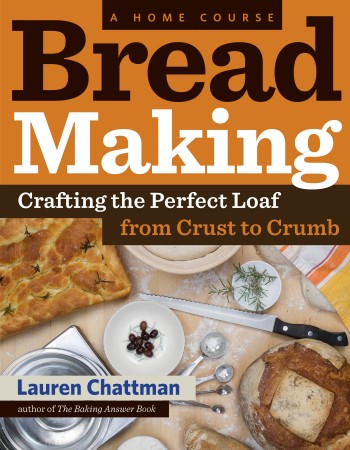 We don't sell books directly through storey.com. If you'd like to buy Bread Making: A Home Course, please visit one of the online retailers above or give us a call and we'll take care of you. Support local businesses when you can!