The Skinny on Keeping Sheep as Pets

With all the fascinating breeds of sheep found at fairs or at fleece and fiber festivals, the idea of bringing a wonderful wooly creature into your own yard can be tempting. So what kind of pets do sheep really make? Just ask Sue Weaver. Sheep, for the most part, aren’t wired to become cuddly pets like dogs or even goats. Humans in the Middle East domesticated sheep approximately 10,000 years ago. Their wild ancestor, the mouflon, was strongly wired to flee in the face of danger. Modern sheep still do. Even the tamest pets respond to scary stimuli like humans planning to trim their hooves or dose them with dewormer. This makes them trickier to handle than most folks think.

Sheep also have a strong flocking instinct. It’s more prevalent in some breeds than others but it’s always there. Researchers find that most sheep are continually stressed unless kept in a flock of at least three sheep, so keeping a single pet sheep is rarely an option.

The exceptions are bottle babies reared by humans and consider themselves small, woolly people. Take Ursula, who rode in the cab of the tractor while her human dad worked the fields and slept on the porch swing instead of in the barn. Or Norman Sheep of Orange, in New South Wales, Australia. Norman’s human parents had no prior sheep experience when his dad found him newborn and deserted along a country byway. A search uncovered no nearby mama sheep, so Norman came home to live with David and Jane. Jane slept on the floor with him for several weary nights until the little lamb settled in. Eight years later he’s still going strong. Fully house-trained, Norman has a younger brother (also adopted as an orphaned lamb), Sheldon. Nowadays they come and go between house and suburban back yard. Bottle lambs can, indeed be fairly easily house trained. It’s easier than training some puppies. If you’d like to learn how, join my Sheep and Goats in the House Facebook group, where you can download free house training tips penned by myself and by Norman’s human mom, Jane Russell.

Pet barnyard sheep are an easier option and a good one if you understand their needs and behaviors. Even so, pick pet sheep carefully because even within a single breed or even a single flock, sheep are individuals like you and me.

Consider Baart, a Classic Cheviot wether (that’s a neutered male) born on our farm seven years ago. Baart head-butted us when he was two hours old. Not a good sign! Our sheep are very non-aggressive, even adult rams, so Baart was an oddity in our breed. However, once castrated, he lost his aggressive urge and simply became a very fearless sheep. He’s gentle now but constantly in-pocket, even toward visitors. Baart is a great pet sheep. With quiet handling, food treats, and especially, clicker training most sheep, even adults, can be easily tamed. When buying sheep to keep as pets, don’t be turned off by the wary ones, but avoid any that panic when humans approach.

Does breed matter? Probably not. While some breeds are frequently sold as pets — Babydoll Southdowns pop to mind—sheep of all breeds respond to quiet, compassionate handling. Our previously untouched Katahdin ewe and her lamb were tame and in our pockets in two short weeks!

Sheep are lovely creatures but keep their nature in mind before you get some.

The Backyard Sheep by Sue Weaver 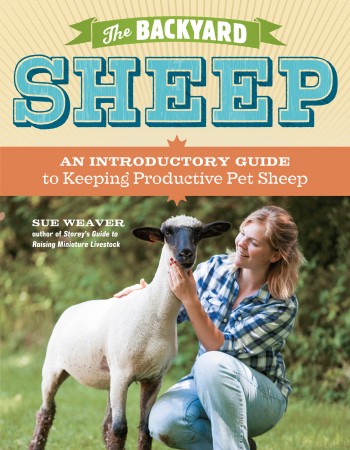 We don't sell books directly through storey.com. If you'd like to buy The Backyard Sheep, please visit one of the online retailers above or give us a call and we'll take care of you. Support local businesses when you can!