Scenes from a New England Winter

Author Clare Walker Leslie looks out at winter in her corner of New England, and sees signs of a world busy with life preparing for warmer days ahead. In the Northern Hemisphere, we think of winter as officially beginning on December 20, 21, or 22. But if you have a chance to stop and think about what this “beginning” is really about, the reality of the word gets fuzzy.

I love the very word “solstice.” At the time of the solstice (both at winter’s beginning and summer’s beginning), the sun stands still, so to speak. At this moment in the year’s seasonal calendar, the length of days stays the same. Then, slowly, slowly, by the end of December, Earth tips itself back toward the sun. If you look at a world globe, you can figure lengths of night and day will vary based on how near you live to the poles or the equator. Last January, our family spent a month in New Zealand. I felt all upside down! It was summer there. The sun was setting very late. Everything was green and lush. The night sky was totally different.

I turn to the Farmers’ Almanac to read that, where I live in eastern Massachusetts, well before the winter solstice, sunsets are already happening later — in fact, by three minutes! The sun’s rising doesn’t start to happen earlier until the second week in January (around the twelfth night, interestingly). This has to do with the slight wobble of Earth as the sun reflects upon its surface.

By January’s end, we in the latitude where I live will have gained almost one hour of daylight. The sky seems brighter. Sunrises are earlier. Even early snowdrops can be seen poking up through the snows of winter.

What is winter? The word comes from an Old English word, “wintar.” January was called “Wulf-monath” by the Anglo-Saxons. We think of it as the harsh time of year, the “dead time.” In fact, in the world of nature, it is not a dead time at all. It is a very important time of rest, germination, and gestation. In my teaching, I like to compare it to our own time of sleep, rest, and restoration. Winter is an essential component of the year in nature’s cycles.

In my part of New England, this is what happens. Adjust the following to fit where you live:

Plants die back but leave roots, bulbs, corms, rhizomes fleshy with next year’s growth, just waiting for the right soil temperature and light to begin growing once more. (You can watch a fun, sped-up example of this miracle by planting indoors the bulbs of amaryllis or narcissus or early daffodils.) Birds have figured elaborate systems of migrations to warmer climates, or adapted to winter survival in all sorts of ways.

Reptiles burrow down into protected and above-freezing places, or partially freeze in groups or singly.

Fish hang out in what is called a “torpor” at the bottoms of ponds and streams, or remain active (think: winter ice fishing). Saltwater fish may migrate to warmer waters. Mammals (deer, coyotes, moose, fox, gray squirrels, and rabbits) remain active during the day and seek shelter at night. Raccoons, skunk, and possum are part-time sleepers. Eastern chipmunks are considered deep sleepers. Woodchuck, marmots, ground squirrels, and bats are true hibernators (you cannot wake them up, as their body temperature has dropped, and metabolism and breathing have slowed way down). The misconception: bears do NOT hibernate but go into half-sleep. Females give birth in late winter. Young stay in the den with the mother until it’s warm enough to be out and about. Males will sleep but also can be out on warming days.

As you can see, the winter months contain amazing adaptations and happenings in the world of nature. Depending on where you live—in the desert, southern or northern states, in the mountains, or by the sea or a lake—the activities in the natural world will vary.

Getting to know the winter world of nature where you live is a fascinating study. I find these books particularly helpful:

I learned a tremendous amount writing my own books, too, spending many wonderful hours tromping around outside in my own winter landscape.

Clare Walker Leslie is a nationally known wildlife artist, author, and educator. For more than 30 years, she has been connecting people of all ages to… See Bio 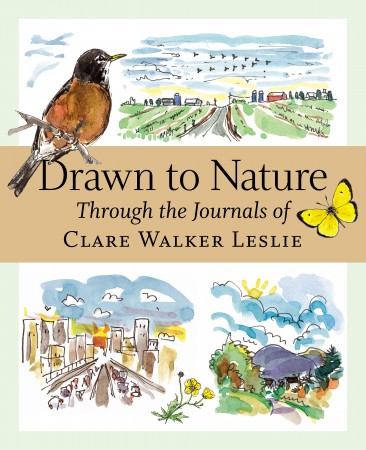 We don't sell books directly through storey.com. If you'd like to buy Drawn to Nature, please visit one of the online retailers above or give us a call and we'll take care of you. Support local businesses when you can!