The author of The Rabbit-Raising Problem Solver talks with us about the sometimes complicated consequences of our cultural love affair with the cute and cuddly bunny.

With more than three decades of experience running her own Aurora Rex rabbitry, Karen Patry has become a trusted source of rabbit-raising wisdom through her website, Raising Rabbits. Now, she’s compiled her answers to common queries in The Rabbit-Raising Problem Solver, a comprehensive Q&A guide covering the full range of issues faced by anyone who keeps rabbits, whether as pets or as livestock.  Recently, Karen talked with us about her new book and of course, rabbits themselves — including the sometimes complicated consequences of our cultural love affair with the cute and cuddly bunny. How did you get started raising rabbits?

I was a kid with a deep hunger for animals, but because I was raised in the cement jungle of the Los Angeles suburbs, I was 15 years old before I even saw a rabbit. When I spied a pet store window full of bunnies, I was immediately smitten. I bought three of them, each a different breed (Dutch, Polish, English Spot). Since then, I’ve had rabbits for the majority of my adult life.

What made you realize there was a need for a book like The Rabbit-Raising Problem Solver? How did you arrive at the Q&A format?

The realization came very quickly — within a year or two of starting the Raising-Rabbits website. There was no easy Q&A resource. Instead, there was tons of misinformation about rabbit care that I saw repeated hundreds of times on hundreds of websites. This information has killed rabbits.

I began to get an avalanche of questions about rabbits and rabbit health on the website. I was answering questions every day, both on the website and personally in emails. I often received the same question (Is my rabbit pregnant?) five times in a day, and answering it five times was tremendously inefficient. To me, a better solution was to write a book, and the Q&A format just made sense.

What are some of the biggest misconceptions about rabbits?

People find it hard not to anthropomorphize rabbits. There are so many cartoons and stories featuring cute rabbits (Bugs Bunny, Peter Cottontail, Roger Rabbit) that people often subconsciously consider rabbits to be cute little long-eared and furry humans.

But rabbits are rabbits; they multiply like rabbits because they are prey animals, not because they feel amorous passion. Dealing with rabbit problems can become a nightmare when anthropomorphism clouds people’s ability to understand or accept the true nature of rabbits.

I like to tell this story as an example: the University of Victoria BC (UVic) was overrun by thousands of feral domestic rabbits, which were destroying the campus and becoming a hazard to people and vehicles. Several animal rights groups used the legal system to pressure UVic into what they saw as a humane solution. The university was forced to round up all the rabbits they could catch, spay and neuter them at a cost of thousands of dollars, and transport the rabbits thousands of miles away to a poorly secured rabbit sanctuary where they could blissfully live out their lives. Dozens promptly slipped under the fence and began digging holes and burrows in the fields of the neighbor’s cattle and horse ranch — holes the cattle could step in and break their legs. The spay/neuter scars were barely healed when the neighbor, after getting no response from the sanctuary owner, shot dead all the rabbits on his property. The legal battle that ensued was short-lived, as the rancher was well within his legal rights to do what he did.

UVic could have live-trapped the rabbits, humanely killed and butchered them, and donated the meat to local soup kitchens to feed a thriving homeless population. What homeless shelter would turn away expensive protein donated to them for free? This would have honored the lives of the rabbits, giving them purpose and value. A year or so later, the university needed to address the feral rabbits once again. This time, they elected to trap and kill. I don’t know whether the homeless shelters have seen any donations. 3-week-old kits in the nest box. Photo courtesy of the author.

What are some of the things about rabbits that have surprised you in your years of working with them?

I have been most surprised and delighted to watch litters of tiny rabbit kits interact in the nest box. There is no fighting, no competing, even as the litter begins to bounce around the cage at age 3 weeks. No one has a favorite spot. No one demands anything. They huddle together for a snooze, all taking their turns in the warm and the cool areas of the huddle. It’s almost as if they’re acting on ancient instinct.

And they are. Their lives in the wild are exceedingly expendable. Three-quarters of all wild bunnies become prey within 90 days of birth. It seems, then, that from the youngest age, bunnies don’t typically create more stress for each other than is essential.

What’s the one piece of advice you didn’t have when you started that you would give every beginner rabbit-raiser?

Probably this: Don’t underestimate a rabbit’s drive to multiply, including its ability to reproduce just as soon as puberty hits! On average, the first litter can be conceived at around 14 weeks of age.

You’ll read in the book’s preface that shortly after I got my first rabbits, I ended up with a surprise litter of cross-bred bunnies. I was a raw newbie at the time, and though I knew that rabbits could quickly breed, it was so tempting to think that maybe I could beat the odds. Lemme tell you: rabbit biology will trump the oddsmakers 100% of the time! Rabbits are rabbits, and you can’t reason with ’em.

Rabbits are an increasingly popular source of meat for homesteaders and others who are looking to raise their own food but don’t have the space or resources that other livestock require. They also have a long history of being beloved pets. How do you manage to speak to people on both sides of the debate?

Rabbits’ role as livestock is, oh, about 4,800 years longer than their role as pets. Sometimes pet owners forget this, and some don’t realize that to start with.

Today, whether through the book or the website, I strive to keep repeating the truth to visitors of all persuasions: Rabbits are prey animals with no innate right to life. A few achieve pet status and will never see the inside of a soup pot. Thankfully, the vast majority of pet owners do get it. They may never eat a rabbit, but they have no problem with the reality of the rabbit’s role throughout the global ecosystem as a source of meat for both predators and humans.

You have a thriving online community, with people from all over the world who write to with questions. Has that community had any impact on you personally, in your learning or in shaping your own rabbit-raising practices?

Rabbit breeders are mostly wonderful individuals! I’ve gained insights from many of them, for which I am very grateful. The use of black oil sunflower seeds (BOSS) as a means to improve lactation is one of those very helpful tips I picked up a few years ago, and which I happily pass along in the book.

I love the sense of community that exists among rabbit raisers and pet rabbit owners. Hearing about a rabbit health issue from someone in, say, Kenya, makes me long to help in any way I can.My mission is to keep providing comprehensive A to Z rabbit information and supporting rabbit owners and rabbit breeders. It’s been a lot of fun!

Karen Patry owns Aurora Rex Rabbit Ranch and runs the website, raising-rabbits.com. She is a member of the American Rabbit Breeder’s Association and the National… See Bio 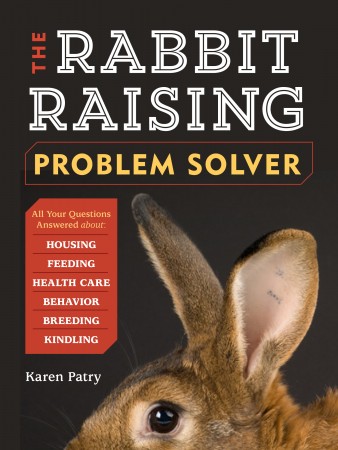 We don't sell books directly through storey.com. If you'd like to buy The Rabbit-Raising Problem Solver, please visit one of the online retailers above or give us a call and we'll take care of you. Support local businesses when you can!