by Regina Velázquez in Recipes Avocado and Lime Creamsicles and Banana Pudding Pops (with a little dark chocolate mixed in). Photo by Mars Vilaubi

If aliens were to study only recipes from women’s magazines from the 1960s and 70s, they’d think us beings who were desperate to change the molecular structure of everything we ingest.

I’m not sure if she was inspired by a women’s magazine or her classy new set of Tupperware popsicle molds, but my grandmother went through a phase of scientific experimentation in her freezer with one such recipe: Jell-O popsicles. I suppose they seemed like a good idea, but something was always off about them. For starters, they never actually melted and dripped. They came out of the freezer and, exposed to warm air, simply got softer. But the most disconcerting thing was that they would occasionally develop little chewy sections on the outside where the gelatin had begun to set before going into the freezer. It was as if they had a rind.

A couple of years ago, on a quest for more nutritious and less disturbing frozen treats for my children, I discovered paletas. These Mexican treats involve the simplest of combinations, with each ingredient unaltered, aside from the blending: fresh fruit and a simple syrup of sugar and water. I’ve played around with many combinations that have been quickly devoured by actual humans: blueberry-lemonade, pear-ginger, roasted plum, raspberry limeade, toasted coconut, strawberry-rhubarb, and bananas Foster. I usually just blend and freeze.

In Making Vegan Frozen Treats, Nicole Weston offers several popsicle recipes that I’ve been itching to try in warmer weather. They are even simpler than the ones I’ve made before, as they don’t require boiling any syrup first. I whipped up Banana Pudding Pops and Avocado-Lime Popsicles in seconds, poured them into the molds, and froze them overnight.

Bananas are an easy fruit to imagine in a popsicle. Blended, they become creamy and intensify in sweetness, especially if you start with the overripe ones that have brown-speckled peels. Though not required, I opted to include chopped dark chocolate, which adds a layer of this-is-not-good-for-you-ness that kids love. Most people — Americans, that is — can’t imagine frozen, sweet avocados, but I recommend that you don’t even think about it. Like bananas, they transform wonderfully into creamy desserts that transport the lime flavor in a texture not at all unlike ice cream.

My first taste-tester was, admittedly, a bit skeptical about the green pop and asked what it was. “It’s a creamy-lime sort of thing,” I said. She shrugged her shoulders and began licking the drips (note: it was actually melting), and eventually I confessed to her it was mostly avocado. She asked her mom to get the recipe.

Best of all, these treats are natural, delicious, and rind-free. Would you trust this green popsicle? Photo by Mars Vilaubi 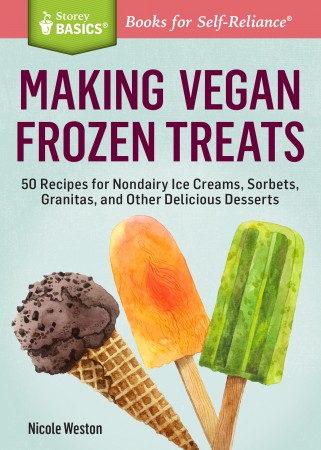 We don't sell books directly through storey.com. If you'd like to buy Making Vegan Frozen Treats, please visit one of the online retailers above or give us a call and we'll take care of you. Support local businesses when you can!