Rob Cardillo has been photographing plants and gardens for over twenty years, and his work illuminates the pages of countless well-known and well-regarded publications. In this special post, Rob lets us in on the creative challenge of capturing Five-Plant Gardens in pictures, and generously shares the process he devised to make the final stunning images. There’s plenty here for the plant-lover and photographer alike. When Storey first approached author Nancy Ondra and I with the idea for the book Five-Plant Gardens, both of us immediately saw its value and wondered how we would illustrate this new series of garden designs. In an ideal world, of course, we would create and photograph each of Nan’s novel gardens at their peak. But we knew that illustrating all 52 garden plans that way meant we’d quickly run out of time, money, and real estate!

We decided to try a more standard approach: we’d use art to illustrate each planting diagram and then run thumbnail photographs of each of the five plants included in a given design. But all of us (including Storey’s talented creative director, Alethea Morrison, and seasoned editor Carleen Madigan) felt this book warranted something more visually exciting than traditional “stock” images of plants.

At last, we decided that Nan would grow out the hundreds of varieties included in the book and we’d photograph each plant piece as it came into its prime — not outside in Nan’s garden but indoors, using a portable studio setting. That way, we could create a clean, uniform look that would highlight the transient beauty of each bloom (and leave the book designer at Storey a greater range of graphic possibilities).

In late winter, I began testing using the only flower I had available in my garden: hellebores. I tried the simplest approach first, placing a cut stem on a sheet of white seamless paper, lighting with small soft light boxes, and shooting from above, and encountered technical problem #1: there were shadows, and some of the wonderful translucent qualities of the petals were lost in the resulting image. To be truly useful to the book designer, the background and shadows would have to be clipped out of the image file with Photoshop — easy enough to do if I’d been shooting cereal boxes or marbles, but not so with irregularly shaped leaves and stems. Next, I tried propping the hellebores vertically as if they were growing, and supporting them with small vases and various clamps. This way, I could move the white background farther away (shadow problem solved) and create a greater range of lighting positions. The results were more pleasant for sure, but would seriously limit a book designer, who would only be able to run the pictures out from the page edges. And, while some plants sat upright and made for beautiful portraits, others, once cut, would quickly flop over. Low-growing creeping plants would be a real problem. Finally, I tried shooting each cut piece laid down upon a backlit stage. The platform was simply a 2×3 rectangle of stiff, milky white Plexiglas propped between two folding chairs. To illuminate the background, I aimed a flash downward at a 2×3 section of white foam core on the floor, about sixteen inches below the Plexiglas. Light from the flash would bounce off the floor foam core and then through the Plexiglas, creating a wonderfully soft and very controllable light source. Another flash was bounced into a small umbrella on a light stand for a top/side light. I used a Nikon D800 with a 60mm macro lens for most of this work, along with a flash set in commander mode on the hot shoe, a device that allowed me to control and adjust the other two flashes remotely. A small desk lamp placed near the stage was just bright enough to help me focus. I adjusted the output of each of the two remote flashes so the plants would look good, while the background would overexpose, to allow for easy removal in editing. I kept a ruler in each frame to give the book designer at Storey a scale reference. I began each session by shooting a color reference card to ensure my white balance was correct. Initially, I used a tripod with a horizontal extension arm, to make sure I was directly above the subject, and a bubble level, to make sure the simple stage and the camera back were parallel. An X-Rite color reference checker, a bull’s-eye surface level, and a ruler were all used to keep the results consistent. Photo © Rob Cardillo.

Eventually, I abandoned the tripod and level and shot handheld at slight angles to catch the best aspect of each plant. To make sure I was holding sufficient focus and that my background exposure was bright enough, I used an iPad with a CamRanger wifi device.

With technical problems solved, we could turn our attention to arranging each plant piece. Some looked good just as they were, while others required a little cutting and pasting.

The concept, writing, design, and printing of this book were all first class, and we’re looking forward to the sequel, already in the works.

You can see more of Rob’s work on his website: robcardillo.com. 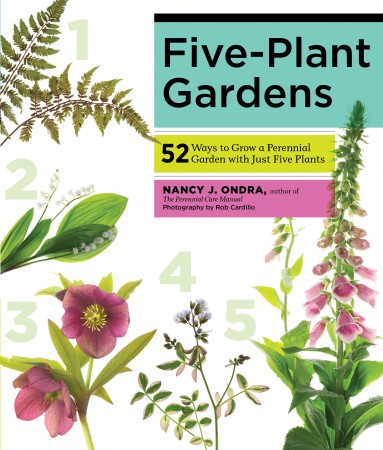 We don't sell books directly through storey.com. If you'd like to buy Five-Plant Gardens, please visit one of the online retailers above or give us a call and we'll take care of you. Support local businesses when you can!