by Kaori Becker in Author Interviews

Mochi Magic author Kaori Becker talks about the cutest mochi ever, making mochi with kids, and why mochi is important to the Lunar Year

You might say that Kaori Becker has cooking in her genes: her grandmother owned a ramen shop in Fukushima, Japan, and her mother Yukiko, is such an inspired home cook, the food she made spurred Kaori to delve deeper into cooking herself. Tapping into that passion, Kaori opened Kaori’s Kitchen, a Bay Area cooking school where she and her mother teach mochi, ramen, and other Japanese and Asian cooking classes. Their popular five-course mochi-making classes inspired the creation of Mochi Magic, a beautiful book that teaches readers how to prepare the Japanese treat at home.

We sat down with Kaori to talk about the tradition of mochi pounding at New Year’s, the cutest mochi she’s ever seen, and why making daifuku mochi is just like playing with Play-Doh.

How did mochi first come into your life?

Growing up, I was always eating mochi—freshly pounded mochi, dango (chewy mochi balls), mochi filled with sweet red bean. It was just always part of my life, because my mom is from Fukushima, Japan.

I remember eating store-bought daifuku mochi from Japanese and Korean stores around the Bay Area. And whenever we would visit relatives in Japan, I’d get fresh dango at the convenience stores. When did you first start teaching the art of mochi making?

I’ve always loved mochi, but it wasn’t until later that mochi came back into my life in a big way. I was in grad school in Ohio, studying English education, interning at a cooking school on the side. Inspired by that experience—and my love of mochi—I found myself getting more interested in mochi making. I would talk with my mom about it, and she taught me how to make the easiest version of daifuku mochi (in the microwave) over the phone!

In 2016, my husband and I moved to San Leandro where I grew up. I realized that mochi is very popular in the Bay Area, but no one was teaching people how to make it. That’s how I got the idea for teaching mochi-making classes, and I had my mom nearby, to help me refine my technique and teach others. What do you love about mochi?

To me, mochi is exciting because it’s so versatile! Mochi itself is pretty simple: It’s a sticky rice cake made from Japanese short-grain rice (mochiko). But, beyond that, its variations are endless.

There are many ways to prepare it—steaming, baking, boiling, pounding, toasting, and even microwaving. And mochi shows up in so many different ways: There’s traditional pounded mochi, mochi soups, and skewered dango mochi coated in a sweet soy sauce. And with daifuku mochi, you can fill them with almost anything: slices of strawberry, ripe mango, raspberries, blueberries, Nutella, sweet red bean paste, matcha cream cheese paste, or even a homemade chocolate truffle! On top of that, thanks to mochiko powder—a sweet flour made from mochiko rice—it’s possible to infuse all kinds of baked goods with a mochi texture, from donuts to cakes.

Why is mochi such a big part of Lunar New Year?

Mochi and Lunar New Year go hand in hand, really. In Japanese culture, mochi has been revered for centuries, because rice is seen the “gift of the gods” and an omen of good fortune. Traditionally, every new year, Japanese families will place kagami mochi (a large mochi topped with a small mochi cake and a citrus fruit) on an altar, to bring good fortune. Making mochi at the start of the year represents bringing good luck into the new year, and it’s also believed that giving mochi to someone else will bring good luck to both the giver and the receiver of the mochi.

And so, around the new year, there’s a lot of mochi going on! The most traditional form of mochi making is mochitsuki, where steamed mochi rice is poured into a hot stone bowl, and two people pound the rice with sledgehammer-sized wooden mallets, until it becomes this smooth, stretchy mound. Mochitsuki is often done at New Year’s gatherings; I remember watching it at Japanese festivals as a kid. People will also make mochi using a mochi machine; growing up, I remember my mom and her friend Emiko pounding loads of mochi in their machine to give to family and friends as a New Year’s gift. And then, of course, there’s ozoni soup, a soup made with mochi and fresh vegetables. Since the mochi is stretchable and can be pulled into long strands, it’s seen as a symbol of longevity. Mochi brownies, mochi pancakes, mochi cupcakes. A lot of the baked mochi is easiest because you mix the batter and pour it into baking molds, so it doesn’t require much technique. It still tastes great, too! The mochi brownie has gotten some rave reviews online, and it’s one of my personal favorites.

What is the cutest mochi that you’ve ever made?

Two of my very favorites are a cute yellow chick and a little pink pig—they’re lots of fun to make! For the pig, I’ll take a pink daifuku mochi, add black sesame seeds for eyes, a piece of pink chocolate for the nose, and two triangles for ears.

If I have more time, I’ll make nerikiri dough—this mixture of sweet white bean paste and mochi dough. It’s really pliable, and I’ll use food coloring to dye it the color I want. For the pig, I’ll dye the dough pink, then roll it out and cover the mochi with it. Then I’ll cut out the eyes, nose, and mouth out of the nerikiri dough and add them on.

Whichever way I do it, I end up with an adorable little pig!

Why is mochi-making a fun activity to do with kids?

Making daifuku mochi is a lot like playing with Play-Doh! You have a small ball of dough that’s soft and malleable—it’s very fun to touch and play with. You take that dough, fill it with the filling of your choice, pinch it to seal it out, round it out, and it’s done. Kids love the sweet taste of daifuku mochi. And throwing mochi to distribute it to your friends is fun, too!

Tried your hand at mochi making? We’d love to see your creations! Find us on Instagram @storeypub and tag your posts with #mochimagic.

Kaori Becker is the author of Mochi Magic and a cook specializing in Japanese cuisine. Growing up “hapa” (half-Japanese) in the Bay Area, she was… See Bio 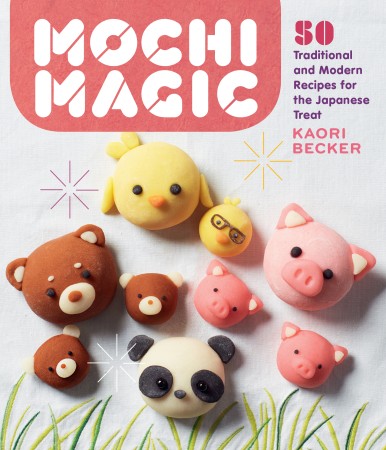 We don't sell books directly through storey.com. If you'd like to buy Mochi Magic, please visit one of the online retailers above or give us a call and we'll take care of you. Support local businesses when you can!