Migration, Milkweed, and the Arrival of Fall

Nature writer Ted Williams explores the great fall migrations — seen and unseen — that occur as the natural world prepares for the stillness of winter.

While not immune to spring-induced giddiness, members of the Williams family are far more afflicted with a previously undescribed malady called fall fever. We feel the first symptoms on those crisp mornings, just prior to the autumnal equinox, when morning glories open on the latticework along the south garden wall, when our lake falls silent save for the lapping of waves and the gabbling of northern ducks, when aspens and tamaracks go smoky gold, swamp maples blaze, and the azure sky is one shade richer than at any other time of year.

Fall brings the fragrance of woodsmoke and leaf smoke, the sweet-rotten scent of frost-killed ferns and deer-bitten apples, young grouse in the touch-me-nots, woodcocks fluttering mothlike into bare alder runs at dusk, wild geese barking as if from treetop level, yet so high they look like ribbons of crepe tacked to the corners of the crescent moon. As Joni Mitchell and our friend Tom Rush sing, they’ve got the “urge for going.” Migrations of geese and other waterfowl are noticed by most people, even those otherwise oblivious to the natural world. But the greatest migrations on Earth pass unseen by all but a few thousand Americans. They happen not with mammals on Old-World steppes or savannas or even with birds along busy flyways, but with sea creatures underwater along our West and East Coasts.

At the neck of the eastern funnel — the inshore rips off Montauk, New York — my friends and I are at hand to watch and participate. Bobbing in little boats, we jockey for position around “boils” of striped bass packed so tightly that our flies sometimes ride on their backs. Such boils happen nowhere else. Bluefish — that bite off our flies and, if we’re careless, slash our fingers — encircle the stripers. Orbiting the bluefish are the shining mini tunas called false albacore, green backs cleaving the surface faster than anyone who hasn’t caught one believes a fish can swim. Bay anchovies — “rainbait” — erupt in panicked sprays. Screaming terns and gulls pick them — along with sand eels, silversides, bunker, herring, and mullet — virtually from the maws of predator fish. Volleys of gannets fall into the waves as if shot by medieval archers.

At home, though, we pay the most attention to birds. As so many familiar species leave our yard and meadow, our appreciation grows for those that stay. Particularly beloved are chickadees whose language we have studied and come to understand; bluebirds who, recently in the Northeast, have forgotten they’re supposed to fly south and instead stay all winter, feasting on winterberries…

The earth is fat in fall, dripping milk and honey into the mouths of wild creatures and into the souls of humans, who will soon be entering their own form of hibernation in front of flickering fires and flickering screens. It seems that all the other seasons have been building up to this one. As nature writer Hal Borland put it: “It was for ripeness in and all around us that winter passed and spring and summer found us.”

Dark Clouds on the Horizon

The day is windless and cloudless with a sky the shade of azure you see only in September. So why is there a shifting, swirling black cloud above that distant barrier island? Line it up in your spotting scope, and you’ll discover it’s several hundred thousand tree swallows, staging for migration to their winter habitat in the southern states. Other swallows have to push on to Central and South America because they depend entirely on insects. During the cold months, how- ever, tree swallows can subsist largely on fruit — especially bayberries.

In addition to their flocking behavior, these highly social birds engage in an apparent game in which they drop a feather from considerable altitudes, then compete to see who can snatch it. The winner climbs and drops the feather again. Offspring from the previous year will assist parents in feeding hatchlings.

Tree swallows are doing better these days thanks to the great popularity of bluebird boxes into which European starlings — one of their major nesting competitors — cannot fit.

Common milkweed has been used to treat dropsy, dyspepsia, asthma, and scrofula. But perhaps it is most effective as a tonic for receding youth and a preservative of the bright, quiet hours of Indian summer. In dry, forgotten fields from Canada south to Kansas, Tennessee, and the Georgia highlands, tufts of silk protrude from the sun-split pods like stuffing from puppy-ripped pillows. When golden popple leaves tremble in the September breeze and the sky goes cobalt, the seed-bearing parachutes of ripe milkweed seem to launch best on the breath of children. Whole hillsides have been planted this way. Remember where the parachutes land, because next spring the tender shoots will provide excellent table fare, similar to asparagus. Boil for 15 minutes, changing the water frequently with fresh boiling water. (Cold water would fix the plant’s bitter juice, which can be mildly toxic to humans.)

Text excerpted and adapted from Earth Almanac © 2004, 2020 by Ted Williams. All rights reserved.

Ted Williams writes full-time on fish and wildlife issues in a monthly “Recovery” column for The Nature Conservancy’s Cool Green Science and in various other publications. A… See Bio 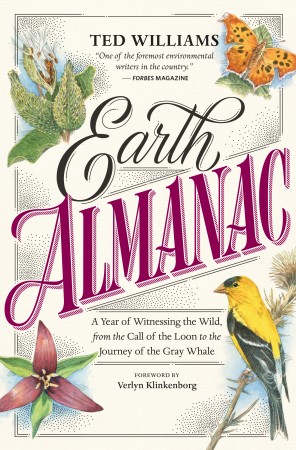 by Ted Williams and Verlyn Klinkenborg

We don't sell books directly through storey.com. If you'd like to buy Earth Almanac, please visit one of the online retailers above or give us a call and we'll take care of you. Support local businesses when you can!