The Big Community Behind a Little Book

by Liz Bevilacqua in Inside Storey

Storey editor Liz Bevilacqua explains how a collection of weekly affirmations from a Buddhist nun arrived in her life at just the right moment.

Ani Trime’s Little Book of Affirmations was one of the first books I acquired for Storey and it came to me in a winding and wonderfully collaborative way that seems unique to Storey. Marlena Torzecka — the owner of Marlena Agency, which represents international artists and illustrators — was also a meditation student of a Buddhist nun called Ani Trime. A few months before her death at the age of 88, Ani Trime set down 52 simple and straightforward Buddhist teachings that she believed to be the most useful and the most helpful for people. This was her legacy. Marlena, seeking to preserve and celebrate these teachings, put the word out to her cohort of artists, asking them to create an illustration, if they were so inspired, for one of the teachings that spoke to them. Thirty-nine artists from 14 countries all over the world responded! Marlena began sending these illustrated teachings out in her e-newsletter, which landed in the inbox of Storey’s creative director, Alethea Morrison. So, from Ani Trime to Marlena to her artists to Alethea to me — whew! There are so many touch points, and so many entryways into this little book of big-hearted thoughts.

I’d never heard of Ani Trime before acquiring this book. I’d read and studied some about Buddhism, and I’d encountered simple meditations in yoga class, but there is something very different (revolutionary, even) about Ani Trime’s approach. Each affirmation is presented as a brief two-part statement, such as, “As everything changes, I remain at ease,” and all of them are deceptively simple. They are the essential and distilled tenets of someone who spent nearly forty years thinking about them. Maybe it’s because I’m a word person — I like mantras! But framing these as affirmations — positive statements in the present tense — rather than future aspirations makes them incredibly empowering. I find them very helpful as a daily meditative practice. Saying the words “I am adequate for all situations” or “I am willing to let go of any thoughts of negativity” plays a trick on my brain. It’s like, Oh, yeah, I AM adequate, I AM willing.

I think it’s not uncommon for books to come into Storey editor’s lives at serendipitous moments. This book came to me at a time of transition in my own life, as I was moving out of New York, selling a house, starting a new job, beginning life in a new place. I began working with Ani Trime’s affirmations each week, thinking about an affirmation in the morning and returning to it throughout the day as a touchstone, or a grounding mechanism, to remind me not what I want, but what I already am: I AM adequate for all situations. I AM willing to let go of thoughts of negativity. I AM willing to be present just in this moment. The other element this book that resonates with me is the illustration. I love visual art, so it was a joy to discover these illustrators from all over the world. Each has a unique visual style: some are playful, some are moody, some are graphics-based, some are painterly. You don’t necessarily have to connect with or use the images in order to understand the affirmations that inspired them, but they offer a place to rest your mind or your eye. And they offer some fun insight into an artist’s mind. Each artist was able to choose which affirmation to illustrate based on what they responded to personally. While editing the book, we decided to reach out to the illustrators and see if they would share some thoughts about the artwork they made and about what the affirmation they chose to illustrate means to them. We included their reflections in the back of the book along with their bios. I like to think that Ani Trime would find delight in this book, not only because it helps her life’s work reach a wide audience but because of the eclectic community it has brought together in the making of the object itself. Liz Bevilacqua is an acquisitions editor at Storey where she works on books about creativity, mindfulness, wellness, herbalism, crafts, health, mind-body-spirit, and more. When not… See Bio 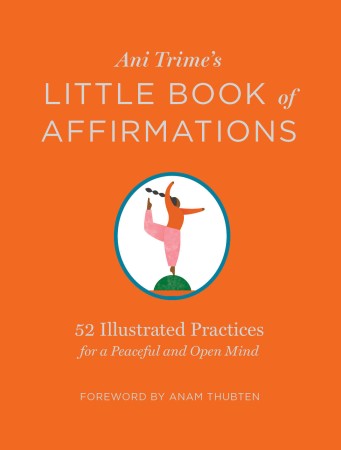 by Ani Trime and Anam Thubten

We don't sell books directly through storey.com. If you'd like to buy Ani Trime’s Little Book of Affirmations, please visit one of the online retailers above or give us a call and we'll take care of you. Support local businesses when you can!