A Year of Building Clubhouses

by Lee Mothes in House & Home

When I was 11 my friends and I decided to form a club. I built our first clubhouse on a vacant lot with my friend Chris, but some kids we didn’t like wrecked it after only a few weeks! Chele and Chris at our first clubhouse on the vacant lot

Totally bummed, Chris and I started looking for a better place to build our next clubhouse. Chele’s friend Kathy had the perfect site: her family’s unused backyard surrounded by a 6-foot fence. After pleading with her dad, who stored lumber there, Kathy won his permission to build, as long as we didn’t use his “good wood.” Kathy then became vice president-and-secretary because it was her yard, and I became the “builder” and was designated president. My friend Chris became a full member along with his sister Chele. Chris had an eye for decorating and brought great stuff for the clubhouse that he found in the trash.

Before starting we all pitched in to clear out the junk and weeds, then hauled in all the wood from the ruins of my old vacant-lot clubhouse with our wagons. We scoured the neighborhood for a few more pieces of wood to get started, but even though the neighbors gave us some pieces as well, this took a few weeks.

After the wood gathering, my friends were content to leave me in charge of construction. That first clubhouse was a good trial run, but it wasn’t built “right.” It had no floor or windows, and the flat roof would have leaked miserably in the rain. For this clubhouse I was determined to build a real wooden floor on a foundation, a sloped roof with tar paper, a door with real hinges, and maybe even a window. For days I looked at the detailed drawings in my Audel’s guide, published in 1923, and slowly figured out a way to start our clubhouse. I finally figured out how to build a floor like this:

As the building progressed I became enchanted by its wonderful logic. After measuring, sawing, and nailing together all the parts for the floor, I stomped around on it, rejoicing in its strength!

The walls were the next step, and building them was still a mystery. I went back to the Audel’s drawings, but I didn’t yet know the carpenter’s method of nailing the pieces together on the floor, then raising the assembled wall frames one at a time.

Instead, I nailed a 2 x 4 to the floor, then had Chris, Kathy, or whoever was handy hold up each 2 x 4 “stud” while I toenailed the end of it onto the “plate.” When as many studs were nailed into place as there were kids to hold them up, I nailed the top plate to the tops of the studs to make a wall frame. This took forever! When the walls were finally framed, I nailed boards across the studs, leaving spaces for the door and a window. Kathy’s back fence served as the fourth wall.

I later learned to put the walls together like this:

The toughest part was the roof. While perched on our rickety ladder, I stared at our roof-to-be. I figured I could set a wide board at the top of one of the walls, then a not-so-wide one across the middle, and none at all on the other wall. I did this, then nailed boards across them to cover the entire roof. It was slanted enough to shed water but flat enough and strong enough to climb onto and nail down tar paper. We had a roof! The door was next. I made one of boards to fit in the hole in the front wall, then found an old set of hinges and some screws. By luck Chris found a window just when we needed one. As windows go it was somewhat strange, with thick wobbly glass that you couldn’t see through, but we put it in anyway.

Now the clubhouse was complete . . . almost. We very soon realized that it was too small for the four of us to use comfortably, so we gathered more wood and made the clubhouse 3 feet longer; also, we added a back door. We decided it was time to paint the clubhouse as well and agreed on a color: turquoise!  We were very proud and quite amazed at how bright it was! Chris (in door at left), Chele, Kathy (in Brownie uniform),
and two visitors hang out after school.

We all felt that we had accomplished something — and with no help from the grown-ups! 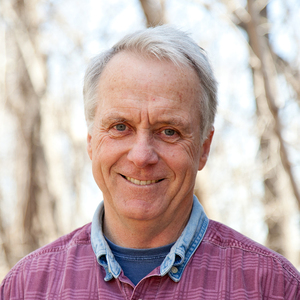 Lee Mothes is an author, artist, and part-time art teacher who has fond memories of his own childhood clubhouses. He studied architectural design, worked as a… See Bio