Katy: An Alpine Goat and Her Kidding Season Suprise

Author Sue Weaver’s Alpine goat Katy was due to give birth any day, and Sue expected more than one kid. But Katy has kept Sue guessing from the very beginning and this year’s kidding season has been no different.

I’ve always liked Alpines. The ones I’ve known have been extra smart and supremely opinionated, qualities I admire in goats. So when a friend who raises Alpines gifted me with a five-month-old pied doeling, I was thrilled. I named the new arrival Black Bell Acres Katya Rose — Katy for short.

Katy immediately expressed her Alpineness by asserting herself. She was sweet and affectionate to us and infinitely ornery to the guardian dog and sheep. She didn’t happily coexist with the resident Nubians either. She finally found a soul mate in a huge, black Nubian wether we call Edmund and they roomed together, apart from the rest of the herd, over the next two years.

We decided early on that Katy would not be bred. She has a supernumerary teat, a tiny non-functional nubbin on her udder that many goat breeders consider a hereditary flaw. Katy, it seemed, had other ideas.

“Milky” is the term used to describe goats that excel at their job. Katy comes from milky bloodlines. Some goats from this sort of background become precocious milkers: they begin lactating without being bred. Katy began producing a lot of milk in one teat when she was a yearling. Like most young does she had tiny teats that were incredibly hard to milk. I asked several veteran breeders what to do. They all said, “You should breed her.” If not, they said, she was likely to experience serious hormonal issues as she aged. This we did not need.

So, since Katy’s kids were assured a lifelong home (we never sell or give away our household dairy goat’s babies), we decided to take the plunge. When Katy came in heat, we turned her out with our handsome young Nubian, Kerla. Katy fled. Kerla followed. And they ran. And ran and ran. Katy did not like Kerla. We took her to our older, proven buck, Martok. And Katy fled. Martok followed. Finally, as the pair flew by for the umpteenth time, John tackled Katy. Martok leapt and mercifully, the deed was done.

Five months later, Katy produced Ranger and Rapunzel, the cutest kids ever born on our farm. And she was a wonderful milker, affectionate and surprisingly easygoing on the milking stand and a peerless producer.

We hoped that Katy, like some other Alpines, would “milk through.” Goats that milk through drastically fall off in production through the winter months but pick back up in the spring without being re-bred. All went well until Katy came in heat last fall. She dropped from nearly a gallon a day to less than a quart overnight. This would not do.

So we took her to Martok, expecting the same type of rodeo we had the year before. Katy nearly swooned when they met. She was in stricken. Besotted. They mated. We scratched our heads. Two days later she was out of heat and producing nearly a gallon a day. She keeps us guessing. Katy got incredibly big, but we were only expecting twins!

Months fly by. We dry her up (stop milking) two months before the anticipated blessed event. She gets bigger. And bigger and bigger. By her due date she can barely waddle. On her precise due date she goes into labor. I’m glad because it’s bitterly cold outside and being a worrier, I’ve been doing night checks and sleeping in her stall for over a week. Things progress nicely — then stop.

Camping with Katy was fun but cold.

I check her internally. Instead of a nose and two front hooves I find a tail and two hocks. It’s a true breech birth, one of the most difficult to reposition. I struggle to work the hind legs back into birthing position and Katy cries. Finally, after repositioning one hind leg I give up and as Katy pushes, I pull. Out flops a black-and-white kid. I strip its face to squeegee mucus from its nostrils and wipe it down with heavy duty paper towels. Katy licks. With great anticipation I turn the kid over. It’s a girl! I know from the internal examination that another kid is in the offing. Katy stops licking, looks preoccupied, then flops down and pushes out another kid. This one arrives in the classic nose and two front feet diving position. Hurray! We set to cleaning the new arrival. It’s another girl! Contractions are harder as labor progresses.

Suddenly, Katy looks extremely preoccupied, swings around and still standing, squirts out another kid. Triplets! And the new one is a huge, handsome boy. John and I are Terry Pratchett fans and continued our two-year Pratchett naming theme by calling the new kids Black Meg, Lulu Darling, and Flash. Triplet 3: Flash was born last, and he’s the biggest!

They’re big, bouncy babies brimming with joie de vivre. I love kidding and lambing time. In 11 years I’ve observed a lot of births. It’s a thrill seeing new life come into the world and a joy watching new mothers bond with their young. I’ve rarely assisted but when a doe or ewe needs help like Katy did, I’m there. The Backyard Goat by Sue Weaver 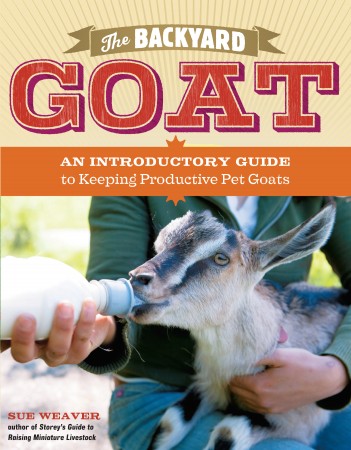 We don't sell books directly through storey.com. If you'd like to buy The Backyard Goat, please visit one of the online retailers above or give us a call and we'll take care of you. Support local businesses when you can!