A pineapple grows in the Berkshires...

Before Gwen Steege was our fiber arts editor, she edited garden books. Don’t Throw It, Grow it!, which describes how to take typically discarded seeds, pits, and roots from fruits and vegetables and grow them into unusual houseplants, was just one of her titles, and it’s followed her in an unexpected way. At the very least, it changed how she viewed the top of a store-bought pineapple few years back. Instead of tossing the spiky head of the fruit in the compost bin, she potted it up. That pineapple top grew into an impressive (if sharp) houseplant, but its pointy foliage didn’t make it the most welcoming specimen to keep on the home front. So, the plant arrived here at Storey where it sits on the floor of Gwen’s workspace, its highest leaves now just reaching the sill of a sunny window. Here it has flourished and — in recent months — surprised Gwen by finally fruiting! A pineapple that is now the size of a large orange sits perched in the center of the plant, elevated on a stalk and with a spiky cap of its own. The fruit flowered a couple of months ago with beautiful fuschia-colored blossoms, and now the only dilemma is knowing when it’s ripe enough to harvest!

Want to grow your own pineapple? Here are the instructions from Don’t Throw It, Grow it! Take note: Gwen’s approach was mostly hands-off — no rotted apples or plastic bags. That might be the reason the plant has taken six years to fruit instead of the three the book says it takes, but if you’re not in a hurry, these extra steps may not be required. Happy growing! Gwen’s pineapple (the red shoots are remnants of the dried flowers).

What it looks like:
The smooth, or Hawaiian, pineapple has long leaves that are spineless. (It accounts for 75 percent of the crops raised.) The vigorous Queen Abakka variety has narrower spiny leaves and grows into a more exotic-looking plant than the Hawaiian type, but both provide striking foliage plants.

If you image the crown of a pineapple six times bigger than it is, you will have an idea of what a pineapple looks like growing in nature. Indoors, a pineapple plant will grow to at least half that size. Pineapple plants die after they flower and set fruit, but this takes several years in the home. They are propagated by off-shoots at the base of the crown.

How to grow it:
Look for a pineapple, either Hawaiian or Abakka, with fresh center leaves in the crown. If you have to keep a pineapple for a few days before using it, sprinkle the crown with water to keep the leaves fresh. Twist off the crown by holding the pineapple in one hand and the crown in the other. Then give a mighty twist; the crown will snap right off. Carefully peel off its lower leaves until you have an inch-long stump. Note the nubs that are in horizontal bands around the stump; these are the incipient roots.

Place the crown in a large glass or jar, fill with water to cover the base of the crown, and add a teaspoon of activated charcoal. The nubs will swell in a matter of days, and the roots will form within a month.

When the pineapple’s roots are 4 inches long, it is time to transplant it to a 6-inch pot. Place the pineapple in the sunniest spot in the house. Do not water until the topsoil is completely dry. The plant’s roots will rot with too much water.

When the pineapple is about three years old, it is ready to bloom. The following instructions sound like witchcraft, but they work. Place the plant, pot and all, in a black plastic bag. Place half of a rotted apple flesh-side down in the crown and place the other half flesh-side down on the soil. Seal the bag for two weeks and then open to see if you can notice the beginning of growth in the center of the crown. If not, reseal the bag and wait another two weeks. Once the new growth is visible, return the pineapple to a sunny spot. It will take almost six months for the flowers to develop, but it is worth the wait! The secret? The ethylene gas that the rotting apple gives off is a growth stimulant.

How-to text excerpted from Don’t Throw It, Grow it! © 2008 by Deborah Peterson and Millicent Selsam. All rights reserved.

Don't Throw It, Grow It! by Deborah Peterson 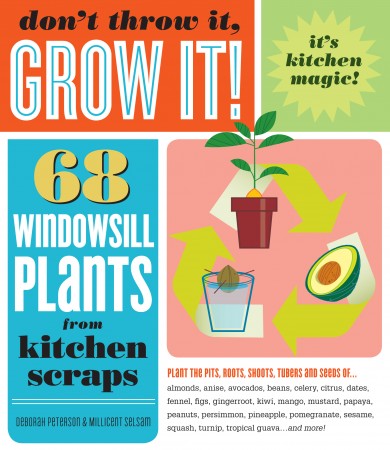 Don’t Throw It, Grow It!

We don't sell books directly through storey.com. If you'd like to buy Don’t Throw It, Grow It!, please visit one of the online retailers above or give us a call and we'll take care of you. Support local businesses when you can!