Understanding How Animals Perceive the World

To make handling livestock as stress-free as possible for animals and humans alike, first we have to understand how animals think. A sheep, two goats, and a llama all look at the person entering their pen. Animals want to see you. Photo © Jason Houston, excerpted from Temple Grandin’s Guide to Working with Farm Animals.

Most humans combine varied degrees of verbal and visual ways of thinking. Animals, however, think only in pictures, sounds, smells, touches, and tastes. This becomes a problem when people interact with animals based on their own perceptions, rather than attempting to view the world the way an animal experiences it.

Calm handling of grazing animals — cattle, sheep, goats, pigs, deer, bison, elk, llamas, alpacas, horses, and donkeys — is supremely important for both animal and human welfare, and for the economics of your farm. Here are a few guiding principles for understanding how animals perceive the world. Knowing this will impact your ability to create a relationship of trust, calm, and positive outcomes for all.

Principle #1: Vision and hearing are the primary sense animals use when vigilant or frightened.

Sheep with long wool around their eyes are said to be “wool blind.” These temporarily visually handicapped sheep may be more fearful or stressed during handling than shorn sheep because their visual field is reduced. Since they can’t see around them, they sometimes don’t know where a person is approaching from. When working with sheep, consider the length of the hair around their eyes and adjust your movements accordingly. Photo © Jason Houston, excerpted from Temple Grandin’s Guide to Working with Farm Animals.

The location of the eyes on either side of the head allows a grazing animal to see nearly 360 degrees without moving his head. Such animals have only a small blind spot, in line with the backbone, directly behind their rear end. Their wide-angle vision is designed to detect motion that may signal the approach of danger and enables them to scan the horizon continuously while grazing.

Cattle, horses, sheep, goats, and other grazing animals can see color but lack the full spectrum of vision available to most humans because they have only two-color receptors. They do not see red. They are most attuned to yellowish green and bluish purple hues.

Due to their two-color receptors, all grazing animals exhibit dichromatism, which means they are more sensitive to harsh contrasts between light and dark colors. Dichromatic sight enhances night vision and helps the grazing animal detect motion — but it can also lead to work slowdowns in an animal handling facility.

Animals moving through a facility will often refuse to walk over a shadow or step onto a concrete floor from a dirt floor. The high contrast of the shadow or the flooring color change alarms them. In their familiar barn, animals will walk calmly over streaks of light they are accustomed to seeing. Photo © John Slater/Getty Images, excerpted from Temple Grandin’s Guide to Working with Farm Animals. Animals may balk in this chute because the harsh shadows are new and novel. Sunny days may cause more problems than cloudy days. Photo © Temple Grandin, excerpted from Temple Grandin’s Guide to Working with Farm Animals.

To perceive depth, grazing animals must stop and lower their heads. In a vigilant state (such as when they are being moved through handling facilities), they may not want to risk putting their heads down to judge depth of shadows and contrasts in flooring. The lead animal may refuse to move forward or attempt to turn back if he is anxious about the situation. A good handler allows the leader time to look, especially when animals are being handled in a place they have never been before.

All grazing animals have very sensitive hearing and ears that move independently of each other. They often “watch” things with their ears. One ear may be oriented toward an approaching person or animal and the other to a passing vehicle. An animal’s “ear radar” can indicate the things in the environment that the animal is noticing. Grazing animals of all species exhibit similar signs when they are anxious, frightened, or panicky. This sheep’s ears are moving in opposite directions, each attuned to something different. Photo © Jason Houston, excerpted from Temple Grandin’s Guide to Working with Farm Animals.

Ear position is also an important mood indicator. When animals pin their ears back, they are either frightened or aggressive. Watch your animal’s ears. They can tell you a lot about how he feels.

Principle #2: Livestock will stay calmer if all yelling and whistling is stopped.

Because animals have sensitive hearing, loud or high-frequency noises are frightening. Results from a study conducted by Jeffrey P. Rushen, a Canadian research scientist, show that screaming in an animal’s ear creates a level of stress equivalent to the surprise jolt of an electric prod. In contrast, the calm voice of a known and trusted person can help soothe an animal that is scared.

The tone of voice a handler uses around an animal is very important. The only sound that people should make is a gentle shhhh, shhh with their mouths to move them. The best handlers are often completely silent when cattle are moving through the handling facility.

Principle #3: The first experience an animal has with a new person, place, or piece of equipment should be positive.

Since animals lack language, visual images and the sensations of sound, smell, touch, and taste are stored in their memories. This is how they retain necessary information about past events in their lives. Animals use the stored pictures as a reference for how they should react to a new object, person, or place in the future.

Principle #5: How you touch an animal will affect how he reacts to you. Sheep and cattle should be scratched under their chins and on their necks. Avoid touching or pressing on the forehead, which encourages butting. Photo © Jason Houston, excerpted from Temple Grandin’s Guide to Working with Farm Animals.

Firm strokes are calming, but patting may be misinterpreted as hitting. Avoid light tickle touches because they may be scary.

The most effective calming touch should mimic a mother animal licking her young. Grazing animals are comforted by the feel of other animals around them, especially when they are closer than 3 feet (1 m) away. When you stroke an animal, make your fingers feel like the mother’s tongue. Do not use pats, which may be interpreted as hitting. Avoid light tickle touches as well because they are too alerting. Photo © Jason Houston, excerpted from Temple Grandin’s Guide to Working with Farm Animals.

Principle #6: New things are scary when suddenly introduced, but they are attractive if the animal is allowed to approach them voluntarily.

If animals are free to explore on their own, novelties are attractive and the animals’ curiosity is heightened. Suddenly faced with a new object, on the other hand, especially in a confined area, they will most likely react with fear.

The time of day for milking or feeding should indeed be the same every day; however, livestock must learn to be comfortable with a variation in routine as well, regarding things they will see or hear. When you sit quietly, cattle will come up to you to get acquainted. Photo © Jason Houston, excerpted from Temple Grandin’s Guide to Working with Farm Animals.

Introduce animals to strange and unusual objects, different vehicles, and new people, and allow them to investigate them on their own. They need to look at and sniff new things before accepting them. Not all animals will react the same way to things. Something scary and new for one animal will be neutral or possibly attractive to another animal, so it is important to accommodate these differences. Each will respond to new stimuli in a manner dictated by his previous experiences or inexperience with similar settings, and by his individual temperament.

Text and photos excerpted from Temple Grandin’s Guide to Working with Farm Animals © 2017 by Temple Grandin. All rights reserved.

Temple Grandin is the author of the New York Times bestsellers Animals in Translation and Animals Make Us Human, as well as Thinking in Pictures, Humane Livestock Handling, Improving Animal Welfare, and… See Bio 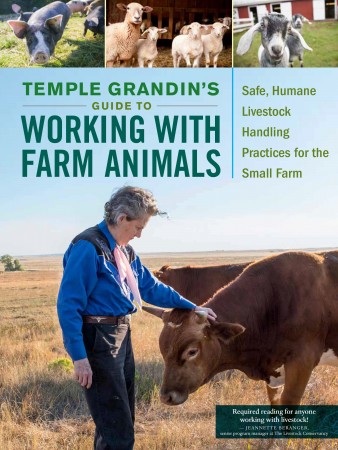 We don't sell books directly through storey.com. If you'd like to buy Temple Grandin’s Guide to Working with Farm Animals, please visit one of the online retailers above or give us a call and we'll take care of you. Support local businesses when you can!