by Hannah Fries in Health & Well-being

Editor Hannah Fries and Digital Features Editor Emily Spiegelman chase the winter doldrums away with a double dose of fire. A fire cider taste-off: Hannah’s on the right, Emily’s on the left

’Tis the season. Winter has been long and cold. The woodpile is shrinking. Immune systems are battle-weary while viruses are just flexing their microscopic muscles. (Or they would be, if they had muscles.) What do we have to protect ourselves with, besides measly hand soap? Not much.

There is, however, an old herbal remedy that’s had something of a comeback in recent years. Whether it works to repel colds is for you to decide — at the very least, it may repel your germy co-workers and family members, and probably vampires too. It’s not for the faint of heart: it’s fire cider.

There are many “recipes” out there, but the main idea is this: apple cider vinegar + garlic + other potent stuff. Rosemary Gladstar offers two slightly different versions in her Herbs for Common Ailments and in Herbal Recipes for Vibrant Health. Emily and I had both been experimenting in our kitchens, so on one more frigid February day, we decided to do a little taste-and-tell.

We set our mason jars of fire cider and our shot glasses on the table. Even just looking at the cider, you could tell they were different. Mine was cloudy and yellow with powdered turmeric. To make it, I had chopped up a whole head of raw garlic and an onion, added a couple tablespoons of turmeric, a generous dash of cayenne, and poured in a quart of apple cider vinegar. (I did not have the horseradish root that Rosemary called for so had to do without.) This conversation piece lived in a large jar underneath my wood stove for a couple weeks to let the vinegar get well infused. Then I strained out the garlic and onion and warmed the vinegar gently on the stove, just enough so that I could stir in a generous amount of honey.

No honey in this particular batch of Emily’s fire cider: though honey’s healing power is indisputable, Emily prefers the untarnished bite of vinegar, and the unfiltered apple cider vinegar holds a sweetness of its own. Horseradish she had aplenty — straight from her own backyard. She also used fresh turmeric root instead of powdered turmeric, as well some burdock, gingerroot, and hot peppers. The result was a clearer cider, with more of a fresh-earth smell. Rugged.

We poured ourselves half a shot of each, knocked one back, then the other, with a vigorous shake of the head. The result? Though the forward flavors were quite different, both had kick, one with more turmeric and sweetness, one with the sour punch of straight vinegar followed by the essence of those earthy roots. Both delivered plenty of garlic and a spiciness that bloomed in the back of our throats. Emily likened the flavor of mine to a hot honey-mustard, no doubt a result of the powdered turmeric I used. We felt the jolt of resurrection in our sluggish veins. The recipe below is Rosemary’s recipe from Herbs for Common Ailments. You can get her recipe for Fire Cider Zest here. In the end, we liked each other’s fire cider well enough to make a trade. Then we took our dragon breath back to our work stations with watery eyes, figuring we were likely inoculated against the plague, at least for a day . . .

Recipe excerpted from Herbs for Common Ailments © 1999, 2004 by Rosemary Gladstar. All rights reserved.

Hannah Fries is an award-winning poet, writer, and editor whose work has been featured in numerous publications including Orion, American Poetry Review, Massachusetts Review, and… See Bio 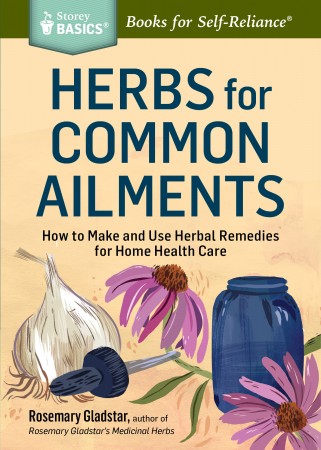 We don't sell books directly through storey.com. If you'd like to buy Herbs for Common Ailments, please visit one of the online retailers above or give us a call and we'll take care of you. Support local businesses when you can!