From Inside the Blind: Q&A with Marie Read Marie Read fell in love with birds as a young girl growing up in England, when a relative showed her a European Robin’s nest that held four tiny blue eggs. Now a skilled wildlife photographer and coauthor of Into the Nest, Marie answers our questions about the challenges and the delights of documenting bird life on film.

Can you talk about what goes through your mind as you’re setting up and waiting for a shot? What senses come into play?

When I’m trying to capture something challenging and fleeting like a bird taking flight, I go into an almost trance-like state of deep concentration. I’m staring intently down my lens at the bird, and peripheral distractions seem to disappear. At the same time my reflexes are primed to react as soon as the bird moves. I also pay attention to sounds. Birds’ vocalizations alert me that my subject is about to arrive or that something important is happening nearby.

What’s the most complicated thing you’ve had to do to get the shot you wanted?

One of my most complicated projects was photographing nesting Baltimore Orioles. I needed to be level with the nest, so, once the female oriole was incubating, I persuaded my handyman husband to help me build a scaffold (well, he did most of the work!). We put up one tier a day to minimize disturbance to the birds, waiting until the female left the nest to feed, which she did regularly throughout the day, and then scrambling to get as much done as possible before she came back. After each tier of the tower was up, we’d back off and watch from a distance to be sure she went into the nest again and to let the birds get used to the changes. After the young had hatched, I spent several hours a day taking photographs on top of the scaffold, sometimes concealed in a blind, until the young fledged. I was able to photograph them actually leaving the nest. The whole project took several weeks.

What’s the most memorable interaction you’ve witnessed between birds — or between a bird and yourself?

I’d set up a perch in a pond to photograph a Belted Kingfisher that regularly fished there. I sat for hours with my lens focused on the perch, but instead the bird landed on top of my blind. I could hear it calling softly and see its feet through the fabric cover of the blind only a few inches above my head. I peeked very carefully out of the corner of one opening, and the kingfisher looked down at me in surprise, like, “What is that?” I gently tickled its feet from inside the blind. It jumped up in the air and landed on the perch for about five seconds, just enough time for me to get a few shots before it flew off! Killdeer brooding its chick. Photo © Marie Read, excerpted from Into the Nest

Can you tell us the story behind a particular photo from Into the Nest?

The backstory of the Killdeer parent brooding its chick is an example of the kind of effort that goes into bird photography. The challenge with nesting Killdeer is timing: you have to be there when the chicks are hatching, because they usually hatch synchronously, and once they’ve dried the adults lead the whole brood away.

This particular nest was on the lawn at the local fire department, in the middle of a horseshoe pit! My friend in the fire department made sure the staff didn’t disturb the nest, especially when mowing the lawn. I knew when the eggs were laid, so as the hatch date approached, I put up a photo blind near the nest and left it there for several days to let the birds get used to it. Then I watched from my car in the parking lot, checking several times a day to see whether the adults were still incubating. When hatch day finally arrived, I spent several hours photographing the Killdeer family interacting, until the parents finally led their chicks off into the big wide world.

What has your work taught you about how we can live well alongside the birds in our world?

Spending so much time watching birds go about their lives, raising their families, has made me aware of how vulnerable they are in the face of ever-expanding human activities. I believe we all need to be much more aware of the birds living among us and how our activities affect them. For instance, I have always had pet cats, but I know what a threat they are to birds — especially fledglings. I’m a huge proponent of keeping pet house cats indoors at all times, and I believe that “trap, neuter, release” programs are fundamentally wrong. Conserving habitat is vital, too. Our neat gardens and parks do little to help birds. We need to include protected wild areas in our parks where birds can nest or rest during migration. We can shrink our lawns, let our backyards go a bit wild, plant native shrubs and wildflowers. That will attract more birds for us to enjoy! 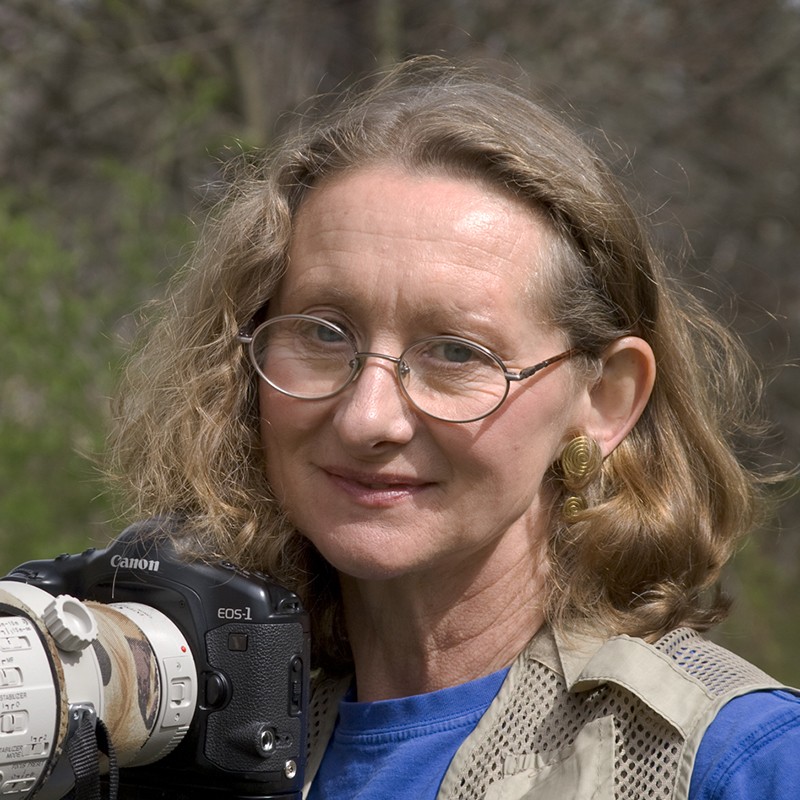