by Storey in Food

Take a break, and enjoy the view chewing on a handful of little blue pearls.

There are many things you can do while on a walk in a forest or a park. They can include bird or animal watching, a yoga stretch or simple meditation, mushroom hunting, or just gazing at the sunset. But this time of the year, it’s also the beginning of a “harvest” season in nature, and I like to pick the wild blueberries that are ripping this month.

As I recently read in one book, there are eight different kinds of wild blueberries that grow in New England. And you really can tell them apart once you come across several of them in the same day, which I did. Bushes come in different heights — anywhere from 3 to 10 feet — with slightly different leaves — ovate to lance shaped — and, most noticeably, with variations of berry color and cluster formation — from light blue to dark purple, although they taste mostly alike. Blueberry shrubs usually like to grow in places where their roots can get enough moisture (they don’t like to dry out on hot summer days), and they like sun on their top branches for the berries to mature and ripen. If you find such a place, you’re in luck; typically, blueberry bushes vegetate in groups and can keep you busy picking for an hour or two. My personal speed is about 2 pounds per hour, which is enough for several cans of jam or two to three blueberry pies.

Here are some pictures I took on my last trip to a forest near Clarksburg, Massachusetts. You can see that some berries are still green; I leave them on and take only ones that separate easily from the stems. I also noticed that bigger blueberries usually concentrate on top branches and young ones. Just try not to break any of them when reaching for fruits. Though picking berries requires some degree of concentration, pay attention to your surroundings. Usually, you can spot some wildlife close by. A couple of times I found myself in the company of some little birds that set a couple of feet from me, probably wondering what such a big animal was doing in their domain. They were whistling to one another, more with surprise than agitation. Some days I’ve spotted big birds, such as heron or wild turkeys, nearby, but they seemed to be more careful of people’s presence than the smaller birds were and kept longer distances. I’ve found that they are quite sensitive to loud noise and will retreat long before you can reach them and take a close-up photograph. For people who like to hike, I can give a tip: If you come across blueberry bushes in the middle of your journey to the top of the hill and see no berries at all, don’t be disappointed by this. The shrubs in the middle don’t get enough sun and water and are mostly fruitless. Keep going up, and in most cases you’ll find some good ripe blueberries on the peak. So take a break, and enjoy the view chewing on a handful of little blue pearls. 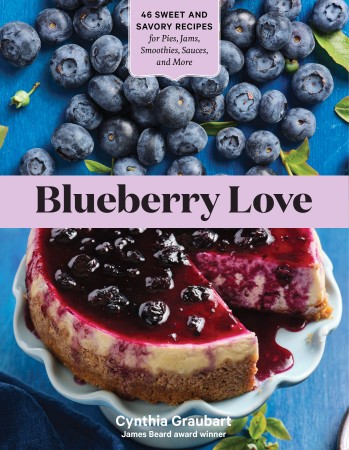 We don't sell books directly through storey.com. If you'd like to buy Blueberry Love, please visit one of the online retailers above or give us a call and we'll take care of you. Support local businesses when you can!