Where the Sidewalk Ends: Exploring Nature with a City Kid

by Mia Lumsden in For Kids

Project editor Michal Lumsden’s nephew may be an urban kid, but even in the city, there’s plenty of nature to be found when you know what to look for.

My 4-year-old nephew, Louie, loves to observe and explore his surroundings. He’s a city kid through and through, so many of the observations he’s stockpiled reflect his Brooklyn upbringing: he can rattle off which subway lines run express, corrects his parents about bus routes, and knows that he’s not allowed to ride his scooter past the No Parking sign halfway up his block.

His curiosity doesn’t stop where the sidewalk ends, though. He loves digging in the dirt, examining a blade of grass, and pulling the tops off of acorns. And so I thought he just might enjoy some of the prompts in Backpack Explorer: On the Nature Trail. Did he ever. Louie gets an up-close look at a sycamore seed pod. Photo by Michal Lumsden.

We set out for an adventure in his neighborhood park on a blustery March afternoon. With the Statue of Liberty in the background and the wind whipping at us off the bay, Louie flipped through the pages. We gazed up at the sky and identified the clouds. We agreed that we probably wouldn’t find many insects, worms, or toads in the snow. He squealed with delight at the close-up picture of the gray squirrel. And then he came upon the Touch It! page. It was scavenger hunt time. We were off! Find something rough: Louie and a locust tree. Photo by Michal Lumsden.

Louie stopped at a few sycamore trees before deciding that the bark of this locust tree was the roughest thing he could find. The melting snow and mud made it easy to find something wet, something soft, and something cool. We decided that the park bench counted as something smooth, and we discovered lots of dried-up sycamore and oak leaves in a garden bed at the end of one walkway. That was where we also found some prickly sweetgum and sycamore seed pods, which Louie examined closely with the book’s magnifying glass. By the time we stumbled on some pinecones, we were pretty cold, so we didn’t take off our mittens to feel if they were sticky.

When we looked at the book again, we realized we’d found everything on the page except something warm. With the sun hiding behind some thick stratus clouds, though, we agreed to extend our scavenger hunt beyond the park. So we stopped at the grocery store, where we finally found some warmth. Post-exploration, Louie warms up from his wintery nature walk. Photo by Michal Lumsden. Backpack Explorer: On the Nature Trail by Editors of Storey Publishing 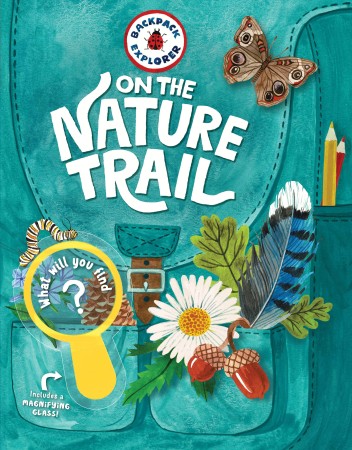 Backpack Explorer: On the Nature Trail

by Editors of Storey Publishing

We don't sell books directly through storey.com. If you'd like to buy Backpack Explorer: On the Nature Trail, please visit one of the online retailers above or give us a call and we'll take care of you. Support local businesses when you can!