The Evolution of the North American Axe

by Brett McLeod in House & Home

It may be a simple hand tool, but over the course of two centuries, the axe became the driving force behind expansion and industry in North America.

Because the axe is such a simple tool — it’s essentially a wedge with an edge — it was affordable to produce and acquire, enabling early settlers from Europe to carve out an agrarian existence from the forest. The axe was their ticket to a strong shelter, open ground for cultivation, a heat source, and even personal protection. When Captain John Smith arrived in Jamestown, Virginia, in 1607 he was surprised to see that a hatchet known as the “trade axe” or tomahawk was a well-established form of currency. These early axes were French and Portuguese in origin, and were valued by the Native Americans as a versatile tool and symbol of heraldry. Driving the trade axe barter system was an insatiable appetite for furs in Europe, driven largely by French, Portuguese, and later Russian traders. However, the European axes would quickly morph into a distinctly American tool, as demanded by the rugged and wild landscape of North America. The British trade tomahawk (right) dates to the 1770s. Ironically, the Oneida Indians, who sided with the colonists during the Revolutionary War, used it in battle against the British. The brass trade tomahawk (left) dates to the French and Indian Wars, and was used both for ceremonial and utilitarian purposes. Note the functional pipe, which was hand drilled the length of the handle. Photo © HeshPhoto, Inc., excerpted from American Axe

When European settlers arrived in the forests of eastern North America, they quickly discovered that the smaller, lighter-weight European axes they had brought with them — which they had used on small-diameter coppiced trees back home — weren’t up to the task of felling large-diameter timber that was better measured in feet than inches. Early felling axes were formed by folding a single piece of iron. This resulted in an axe with a thin poll that wasn’t really up to the task of heavy chopping. Photo by Mars Vilaubi, excerpted from American Axe.

These early settlers made two modifications that resulted in the modern felling axe:

A heavier poll. First, the settlers added substantial weight to the poll of the axe. This additional weight meant that the woodsman didn’t have to swing as hard and could instead let the weight of the axe do the work. More weight behind the handle also meant better balance, which made for truer swings.

A shorter bit. The settlers also shortened the bit (the cutting edge). Early European axes had a wide cutting edge, which made for an effective battle weapon but didn’t allow for concentrated penetration when it came to chopping wood.

By the late eighteenth century, felling axes began developing regional identities as blacksmiths and lumberjacks named their axes after the places they were made; Connecticut, Michigan, Maine, and Pennsylvania became popular patterns. As they replaced the blacksmith, modern forges began to produce dozens of patterns for different uses and enough pattern choices to satisfy lumberjacks from coast to coast.

Upon its entry to the “New World,” the axe wasn’t the tool of the lumberjack; it was the tool of the pioneer, a means of providing shelter and fuel. The American felling axe allowed homesteaders to clear land, build and heat their cabins, fence their livestock, and cook their food. With an axe, a basic cabin could be constructed in a week out of pole-sized timber. The notches of these early cabins were shallow and crude; the spaces between the logs were chinked with clay, plaster, oakum, moss, or anything that would reduce the draft and help keep the heat. The head of an axe was used to push the material to the center of the logs where it’s tightest, to help close the gap. The importance of good notch work when building a cabin cannot be overstated — notches tie the corners of the building together and, if made correctly, create a weatherproof shelter. Like axe patterns, the notches used for log cabins often reflected their place of origin.The traditional saddle notch (shown here) originated in Scandinavia and followed immigrants to the northern United States and Canada. Photo © Keith Douglas/Alamy Stock Photo, excerpted from American Axe.

Once the cabin was established, the axe was put to use girdling trees. By using the axe to scribe a ring around the tree, nutrients were cut off from the canopy, leaving a standing dead tree. This standing firewood was an important part of how the settlers kept warm in the winter, but on a grander scale allowed for massive burning of dead and dry forests that could then be converted to agricultural lands.

For more than two centuries, the axe occupied a central role in settling, and literally building, America. From the Civil War to the mid-1960s, the American axe was in high production. However, by the early 1960s, it became clear that the axe was moving from a starring role to a minor character in the American landscape. The transition to chainsaws, migration from rural to suburban environments, and decline of wood heat all contributed to the end of the golden era of axes. Arguably the most collectible of American axes made during the golden era, the Black Raven is sought after for its intricate etching that, to many people, represents a bygone era in American toolmaking. Photo by Mars Vilaubi, excerpted from American Axe

In an effort to stay afloat, axe manufacturers responded by merging companies, relocating to Asia and South America, and diversifying by making other tools. For those manufacturers who survived, it became clear that the American consumer was no longer a lumberjack who depended on a quality tool for his livelihood, and was instead more likely a suburbanite who was apt to use the axe for grubbing out an ornamental shrub in the lawn, or splitting a few pieces of wood on a summer camping trip. This led to a race to the bottom, resulting in cheap, inferior axes.

The recent interest in traditional tools has inspired independent blacksmiths, boutique axe makers who turn out a few dozen axes per year, and a few mass-producers of premium axes that are specifically designed for discerning woodsmen. Even large-scale American tool companies, such as Council Tool, have developed premium axes to bring quality axe-making back to America.

For some, the American axe has come to represent brute strength, the taming of nature, and even violence (Lizzie Borden comes to mind). But it’s also a symbol of hard work, honesty, and simplicity. It’s a tool that combines strength, utility, and aesthetic appeal — that’s just part of what makes them so fascinating.

Brett McLeod is the author of American Axe and The Woodland Homestead and an avid axe collector and restorer. Before becoming a forestry professor and… See Bio 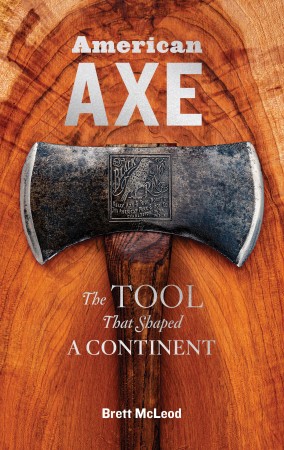 We don't sell books directly through storey.com. If you'd like to buy American Axe, please visit one of the online retailers above or give us a call and we'll take care of you. Support local businesses when you can!