Postcard from the Fiber Festival: The Acquaintance of Animals

by Deborah Robson in Author News

Whether you’re a yarn enthusiast or purely an animal lover, author Deborah Robson says a visit to the livestock barns at a fleece and fiber festival is well worth your while. Deborah Robson, checking out a Shetland flock on Shetland. Photo by Mary Macgregor.

As I write this, I’m sitting in an apartment in Reykjavik, Iceland, nearing the completion of about seven weeks of travel, teaching, and looking at sheep in England, Wales, Scotland, Shetland, and Iceland. It’s been a great trip, and by the time I get home later this week I’ll have covered between nine and ten thousand miles (and seen at least twenty-seven thousand sheep, probably more).

Splendid as this adventure has been, and invaluable in its own way, checking out the fiber animals at a festival that includes livestock remains the best way to get familiar with a variety of critters and the differences between them.

When I teach at The Maryland Sheep and Wool Festival, I am adamant that I not be scheduled to have a class during the Parade of Breeds that happens early on Sunday afternoon. It’s a highlight of my year. I also spend any free moments in the breeds display barns and then among the pens of animals on site for the competitions.

At Shepherd’s Harvest Sheep and Wool Festival in Minnesota, the trick is in pulling oneself away from the siren call of the fiber- and yarn-display market and wandering through the smaller but very rewarding barns with the sheep and llamas and alpacas.

You can learn a lot about fiber by making the acquaintance of the animals that grow it — and the people who care for those animals, who often love to talk about what they do and why they do it. The next time you’re at a festival, wander over and look around. You’ll be glad you did. 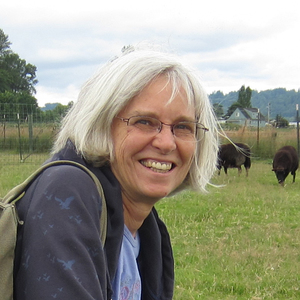 Deborah Robson is co-author of The Fleece & Fiber Sourcebook and Knitting in the Old Way. She is a former editor of both Shuttle, Spindle… See Bio