Buying a Food Dehydrator: How to Choose (and Use) the Right Model for You

by Teresa Marrone in Food

When purchasing a home food hydrator, should you opt for stackable-tray or box-style? And what about those manufacturer-recommended drying times?

When you become interested in dehydrating foods, your first decision will involve the method and equipment you’ll use. Many people do their first “real” dehydrating in their home oven. This allows you to try a batch or two of food with little or no initial investment. Oven-drying is generally not a good long-term solution, however, because it costs more to operate an oven over the extended periods needed for most dehydrating than to operate a manufactured dehydrator.

Manufactured dehydrators for home use come in two styles: those with stackable trays, and those that are solid boxes with removable trays. Here’s some information that compares the differences, as well as the strengths and weaknesses, of each design. Most stackable food dehydrator models come with four to six trays, and you can purchase additional trays to increase the capacity of the dehydrator, simply stacking them up. Photo © Adam DeTour, excerpted from The Beginner’s Guide to Dehydrating Food, 2nd Edition.

Stackable-tray dehydrators are composed of individual plastic trays that stack on top of one another; most models have round trays, but some have square trays that make more efficient use of the space. The stacked trays rest on a base unit that typically contains a heating element and a fan, although some models have the heating element and fan in the top. (Do not even consider models that don’t have a fan; these units, although very inexpensive, are inadequate because moving air is critical to proper dehydrating.) Units with top-mounted elements are nice because if food pieces fall between the grids on the tray, or if liquids drip, they land on a smooth base plate that’s easy to clean. Dehydrators with the elements in the base have openings in the base for ventilation and heat, and if food falls into the openings, the base can be difficult to clean.

A big advantage to stackable models is that they are expandable. Most come with four to six trays, and you can purchase additional trays to increase the capacity of the dehydrator, simply stacking them up. A disadvantage to stackable models is that the heated air must blow through the trays closest to the elements before reaching the other trays. Quality stackable dehydrators are designed with vents in the rims to move fresh air over each tray, but they are still generally less efficient than solid box styles, which have the elements mounted on the back wall so that fresh heated air blows horizontally across all trays. With stackable models, you may have to rotate the trays from top to bottom several times during dehydrating to ensure that all trays are exposed to the full heat and ventilation. Solid liner sheets also impede airflow, so if you plan to make a lot of fruit leathers or to dehydrate foods such as thick soups and sauces, you may find that a box-style model is a better choice. Solid box-style dehydrators are more expensive — often a lot more expensive — than stackable models, and hold only a set number of trays. With box-style dehydrators, the fan and heating element are generally mounted on the inside back wall of the unit, so fresh heated air blows across all trays rather than through a stack of trays as with stackable models. Most box-style dehydrators have plastic walls and trays; others have metal components, and some are entirely built from stainless steel. (Never consider aluminum or galvanized metal for dehydrator trays; these corrode from acids in food and also can leach chemicals into the food during drying.)

Box-style dehydrators are generally more efficient and easier to regulate than stackable models; many models are also insulated to prevent heat loss. With well-designed models, you can dehydrate a full batch of food without rotating the trays, making them a good choice if you plan to run the dehydrator overnight or when you’re away from the house. They are usually bulkier than stackable units and take up more countertop space. Another point to consider is the rigidity of the trays; some are flimsy and can twist or bend when loaded with food, making it difficult to slide them into the dehydrator. Look for solidly constructed trays that are at least 1 inch apart. if you plan to make a lot of fruit leathers or to dehydrate foods such as thick soups and sauces, you may find that a box-style model is a better choice. Photo © Adam DeTour, excerpted from The Beginner’s Guide to Dehydrating Food, 2nd Edition

TIPS FOR USING A MANUFACTURED DEHYDRATOR

When you buy a manufactured dehydrator, read through the enclosed manual, but take some of the advice with a grain of salt. Here are some suggestions to help you produce top-quality dehydrated foods.

The best temperature for dehydrating specific foods may not be the one recommended by the manufacturer. Keep notes of temperatures used and the results produced as you gain experience in dehydrating, and let that be your guide.

Do monitor the dehydrator’s temperature yourself. Insert the stem of a quick-read thermometer or a small remote probe thermometer into an opening, or slip it between the trays. Check the temperature after the dehydrator has been running for about 20 minutes, and then adjust the setting if necessary. Continue to check it periodically throughout drying, if possible, because the actual temperature changes as the food loses moisture (warm air holds more heat than cool air). Be aware also that some manufactured dehydrators cycle frequently from higher to lower heat, so you may see fluctuations due to that. Either adjust the setting so the actual operating temperature never exceeds your top limit, or go for an average of the high and low temperatures; for example, a range of 130 to 140°F (54 to 60°C) averages to 135°F (57°C).

Don’t automatically follow the manufacturer’s advice if it says you don’t need to rotate trays or move foods around. The first few times you use your new dehydrator, check the food on the trays every hour or two. You may find that the food is drying unevenly from tray to tray or even within the same tray.

Do trust the evidence of your senses. If the food is drying unevenly in a stackable-tray dehydrator, periodically switch positions of the trays, moving the top tray to the bottom of the stack each hour so that all trays spend time directly next to the heat source. If food is drying unevenly in a box-style dehydrator, periodically rotate trays from front to back and also move them from top to bottom. With either style, move individual pieces of food from the center of the trays to the edges if foods are drying unevenly on individual trays.

Teresa Marrone is the author of several cookbooks, field guides, and regional books. She is very active in her local food scene and has written… See Bio 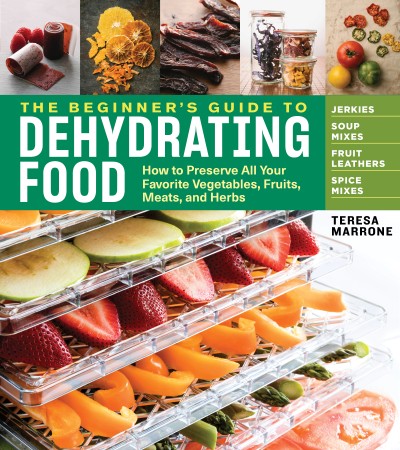 We don't sell books directly through storey.com. If you'd like to buy The Beginner’s Guide to Dehydrating Food, 2nd Edition, please visit one of the online retailers above or give us a call and we'll take care of you. Support local businesses when you can!