Bird by Bird: A Rite of Passage and the Weight of Loss

Most of the time, the impact of the loss of a species is hardly measurable. But declining bird populations take a toll on more than just our environment. More than forty years ago, when I reached what my grandfather estimated to be the eve of puberty, I was summoned to spend the weekend with him at his house in rural Connecticut. I knew what to expect because my four older brothers had undergone the same rite of passage. The climax of the weekend would be the ceremonial presentation of a double-barreled shotgun, followed by sober instruction on firearm safety and general manliness. Then my grandfather would take me on an excursion into the woods and we’d fire off a few rounds.

When my turn came, however, the ritual had changed. Instead of a gun, my grandfather gave me a double-barreled pair of binoculars, and early the next morning he took me on my first bird walk. I was bewildered, but within an hour my disappointment was forgotten, shoved aside by sheer awe at the sight of a redstart hovering in midair, the flute music of a wood thrush, the swoosh of chimney swifts rushing in formation overhead.

Out of the cacophony of the dawn chorus, my grandfather taught me to pick out the rhythm of a dropped ping-pong ball in the field sparrow’s song and the towhee’s exuberant “drink your tea!” By their silhouettes alone I learned to distinguish a phoebe and a kestrel. That weekend my grandfather lifted the veil into a new world. I didn’t want our time together to end; I didn’t want to go back to my own family’s farm where, to the best of my knowledge, there were no birds. Of course, back home in the Berkshires of western Massachusetts, I found all the birds I’d been introduced to in Connecticut, and many more, ambassadors of every color: electric-blue indigo buntings, blood-red scarlet tanagers, earth-toned veeries. I still remember the first Blackburnian warbler I ever saw, his throat and cheeks so vividly orange, his face seeming ready to burst into flames.

Spring and summer mornings thereafter, I’d wake up and listen to the birds singing in my backyard. If there was a sound I couldn’t recognize, I’d throw on a shirt and pair of pants, grab my binoculars, and track it down, something I still do today.

In his later years, my grandfather would grumble that birds were becoming scarcer and scarcer. It was tempting to write off his gloom as an elderly man romanticizing the past, or maybe just his deteriorating hearing and eyesight. But it was true that the whippoorwill that had kept me awake nights when I visited him as a boy had gone quiet, and the woods and fields of the Northeast felt emptier to me.

A few years ago, the National Audubon Society released a definitive study of population trends of North American birds, a monumental effort based on decades of data from the annual Christmas Bird Count and breeding bird surveys. The study confirmed what my grandfather feared and what most of us now know: Birds that I used to see routinely during my upbringing in New England — evening grosbeaks, eastern meadowlarks, northern bobwhites — are in freefall. The losses are mind-boggling. Since my grandfather introduced me to birds just half a lifetime ago, once-common species have declined by as much as 80 percent due to the usual suspects: habitat loss, pesticides, introduced species, and climate change. The songs of tens of millions of birds have been silenced. It feels as if the lights are dimming.

In one sense, extinction is hugely overrated. The vast majority of animals and plants that disappear hardly leave a ripple in the pool of life. Species become rare, they vanish, yet economic systems persist. In some cases, biological communities are fundamentally altered because of the missing pieces, but most of the time the ecological effects of extinction of species like Bachman’s warbler or even ivory-billed woodpeckers are hardly measurable. The true loss is spiritual and aesthetic, not functional or economic. Life would go on if every Shakespeare play and Beethoven sonata were destroyed, but to use the words of the Audubon report, our skies would be “a little quieter and the landscape a little drabber.” Of course, we’ll always have recordings of bird song and videos of bird behavior to fall back on, a digital memory, as it were. But will that be enough?

I can see now that my grandfather’s rite of passage was really about connecting us with the land. It was about learning how to become intimate with our world’s signs, smells, sounds, textures, and rhythms. It was about knowing where we are and who we are. How wonderful it would be to be able to pass that gift on to my own grandchildren.

Text excerpted from The Naturalist’s Notebook © 2017 by Nathaniel Thoreau Wheelwright and Bernd Heinrich. All rights reserved.

Nathaniel T. Wheelwright is coauthor of The Naturalist’s Notebook with Bernd Heinrich. He is the Bass Professor of Natural Sciences at Bowdoin College in Brunswick,… See Bio 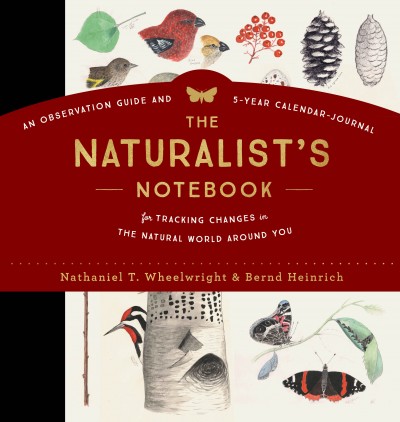 We don't sell books directly through storey.com. If you'd like to buy The Naturalist’s Notebook, please visit one of the online retailers above or give us a call and we'll take care of you. Support local businesses when you can!