For the Love of Lard: Apple Pie with Lard Crust

It’s a debate bakers know well: Which makes the flakiest piecrust — butter or lard? Author Andrea Chesman digs into the reasons to opt for the purer form of fat.

You have undoubtedly cooked and baked with butter yourself, or others have prepared food with butter for you. But have you tasted a superior piecrust or a biscuit made with lard or beef tallow? Fat tastes good — and it defines the flavor of traditional cuisines around the world. If you browse the Internet for traditional recipes, you’ll find many of them were originally made with animal fats, particularly lard. Why lard? Because it was abundant and cheap, and produced great results. Butter, even in northern dairy regions, was always more limited in supply than lard.

Animal fats work much the same way butter (also an animal fat) does in baking. The fat interferes with the development of gluten by “shortening” the protein strands that are created when flour is mixed with water; this tenderizes a dough. Fat conducts heat through a batter to aid in browning. When beaten, the fat holds air to lighten a batter or frosting, though not as fully as butter does. Finally, fat provides the illusion of moisture or wetness on the palate.

The fat crystals in animal fats are also larger than those in butter, which means there is more empty space left behind when the fat melts — more empty space also means more layers and flakes.

Animal fats are 100 percent fat, just like vegetable shortening, whereas butter is about 80 percent fat, 15 percent water, and 5 percent milk solids. You can substitute any animal fat in any recipe that calls for shortening without making any changes to the recipe. If you are substituting an animal fat for butter, you will sometimes have to compensate for the absence of either water or milk sugars or both.

The misconception that people have about baking with animal fats begins and ends with the idea that the animal fats impart a meaty flavor (with the exception of bacon grease; more on that below). Properly rendered lard and tallow simply do not have a meaty flavor. Poultry fats do have a detectable flavor and are softer than tallow and lard, and that does limit their use somewhat. That said, I’ve made piecrust for sweet pies with chicken fat and no one noticed any odd flavors — and it was marvelously crisp.

When it comes to greasing the bakeware, lard is most easily applied with a paper towel in much the same way butter is used. It will offer superior nonstick qualities and will not cause a buildup of a gummy finish. Poultry fat and bacon grease can also be used, though bacon grease will definitely contribute flavor. This may be exactly what you want in a corn bread, but not in a pound cake.

Baked goods made with bacon grease tend to have a greasy mouthfeel, and the bacon flavor is too pronounced (in my opinion). If you want to experiment with bacon grease, try using just a tablespoon or two and using lard for the remaining fat needed. Consider also that bacon grease will add salt and sugar, further affecting the flavor of whatever it is you are baking. In a pastry or pie dough, the fat distributed in the flour physically prevents the proteins in the flour from bonding with each other and with water to form gluten, which toughens a crust. During baking, the water turns to steam and the fat melts, leaving empty pockets between layers of pastry to give a crust its flaky quality. Many chefs prefer a mixture of lard, for the texture, and butter, for the flavor. This suggests that butter is necessary for the flavor. In fact, an all-lard piecrust tastes just fine. Poultry fats, leaf lard, and tallow all work well here; bacon grease does not.

In most pastry and pie doughs, the absence of water is an advantage. This is the reason pie doughs shrink less when made with an animal fat other than butter. But the absence of milk sugars delays the browning, and overbaking can result in an overly crisp pastry. Also, while butter imparts a buttery, nutty flavor, lard and tallow should be completely neutral and contribute nothing in terms of flavor. Poultry fats add an elusive richness that is almost like butter and does work in a sweet pie.

To adapt recipes for pastry and pie doughs:

When a recipe calls for lard, rendered lard from any part of the pig is fine, including leaf lard. (The only lard to avoid is the shelf-stable supermarket lard.) But when a recipe — almost always a pastry or dessert recipe — specifies “leaf lard,” only leaf lard will do. Leaf lard is the fat from around the pig’s kidneys. It is mostly pure fat, with some collagen shot throughout. This is the fat that you want to render into a pure white fat to bake with. Leaf lard is a hard fat. The crystalline structure of leaf lard is slightly different from rendered lard from elsewhere on the pig, which in turn affects the texture of the finished dish.

I have been obsessed with making a perfect apple pie for years. I want the crust flaky and tender. Well, I probably solved that with a lard crust, though a poultry fat or tallow crust works fine. Then I want a juicy filling, but it can’t be runny or gummy. Cooking and thickening the apples before putting them into the crust, a make-ahead technique, solves the runniness problem because you know exactly what you are putting into the crust. This works particularly well with Granny Smith apples, which retain a pleasing firmness. Other varieties may soften more; I leave it to you to find the apple or combination of apples you like best.

Double-Crust Pastry Made with Lard

Lard pastry handles beautifully and makes flaky, tender piecrusts. Although it is quicker to make the crust in a food processor, cutting the lard into the flour with a pastry cutter or two knives — or by rubbing it in with your fingers (my preferred method) — results in a more tender, flakier crust. If you like, you can swap some of the lard for butter for heightened flavor. A little sugar (1 tablespoon) brightens the flavor of an all-lard crust, but my jury is out on whether two or three tablespoons of sugar is best for a sweet crust. In my opinion, the sweeter the filling, the less sugar is needed in the crust: A tart apple pie benefits from more sugar, while a chocolate cream pie doesn’t need it.

Text and recipes excerpted from The Fat Kitchen © 2018 by Andrea Chesman. All rights reserved.

The Fat Kitchen by Andrea Chesman 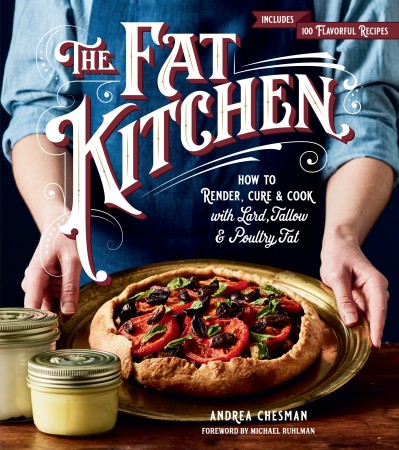 by Andrea Chesman and Michael Ruhlman

We don't sell books directly through storey.com. If you'd like to buy The Fat Kitchen, please visit one of the online retailers above or give us a call and we'll take care of you. Support local businesses when you can!